Home/ Interviews/ There were no policies or relief introduced in this year’s budget for the alcoholic-beverage space: Abhinav Jindal, Kimaya Himalayan Beverages

There were no policies or relief introduced in this year’s budget for the alcoholic-beverage space: Abhinav Jindal, Kimaya Himalayan Beverages

The alcoholic-beverage industry in India is eyeing a potential growth phase now, but it has not seen a V-shaped growth trajectory like the other industries, says Abhinav Jindal, the CEO and Founder of Kimaya Himalayan Beverages. 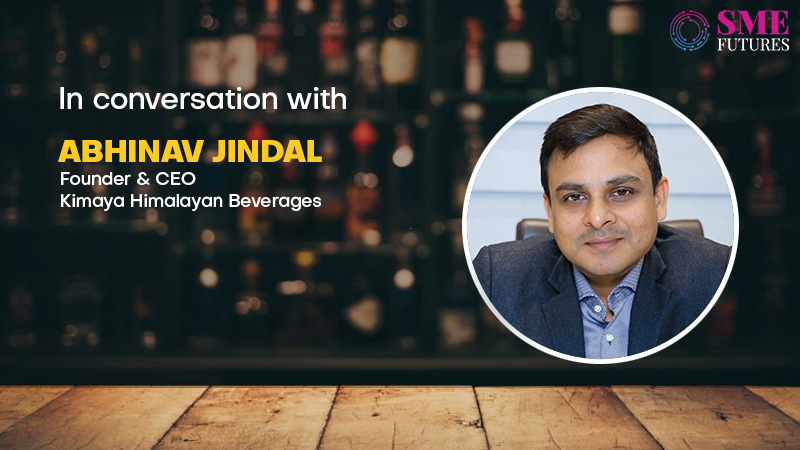 The pandemic seems to be weakening now but it is evident that it has adversely impacted almost every industry of our country on its rampage across the globe. However, most industries have been slowly recovering and tentatively growing for a few months now. Meanwhile, the Union Budget 2022-23 has been unveiled and has brought in good news for some sectors but the same cannot be said for the alco-bev industry.

In an interaction with SME Futures, Abhinav Jindal, CEO and Founder of Kimaya Himalayan Beverages shares his views on the budget and discusses the various aspects of the industry.

Given the impact of the pandemic, what is the current state of the Indian alcohol and beverage industry? In other words, how has the recovery progressed so far?

The beer industry in India is in its growth stage. It has evolved from manufacturing standard beers such as strong and lager beer to flavoured and variety beers and houses more than 140 beer brands in the country.

The beer Industry has a lot of growth potential. However, being hit twice in a row with a pandemic at its peak during the main beer season, has certainly hampered its growth vis a vis what was projected before the pandemic hit us.

It has not been a V-shaped growth for the alcohol companies, unlike the other industries. It has not been robust but gradual as the industry’s growth is subdued.

So, we are bullish about the potential that our Alco-Bev industry has, and it will soon recover from the losses that it has incurred.

Since the industry has evolved in the last two years, what new adaptations have you made in your business?

We have identified and pre-prioritised the revenue opportunities by placing the right resources and allocating the right budgets with all the stakeholders. We further planned a tactical movement with a proactive analysis of the market response to help us to take controlled and effective measures. We kept pushing for the sales, connecting with the customers and taking purpose-driven feedback.

Also, we would be strengthening the organisational structure of the company. We would be utilising the resources to their maximum potential. We also intend to brace up the professional environment and inculcate compliance ethics and integrity in the working teams. We are in the process of hiring trainees from highly ranked institutes from across the country. It will enable us to learn from each other and create value for the company, for these young minds, and for the brand as well.

The Union Budget is out. What did it bring in terms of the Alco-Bev industry?

There were no policies or relief introduced within this year’s budget announcements for our industry. We were expecting the government to address the various issues being faced by the small business owners in the Alco-Bev space. We expected the government to provide respite against triple taxation, i.e., Input tax credit paid on GST and the VAT, and the excise tax that we pay to the state government with no benefits.

It was indeed important to see a standardised structure with simplified, reduced tax slabs and input tax credits to be returned to the industry to reduce the higher costs of the businesses. The triple taxation is not allowing the businesses to grow as fast as they should.

Furthermore, the beer industry should have been considered for being brought under a priority industry sector, i.e, the Agri industry. The brewers and the farmers have a highly symbiotic relationship. The primary ingredients in the mass production of beer include yeast, hops, and fermentable grains such as barley and provide a direct benefit to the agrarian economy of the country.

The abolishment of multiple laws, and a uniformity in the policies of the different states was important to provide ease of doing business in the newer territories and for reinforcing transparency. The start-ups in the Alco-Bev space are seeking supportive policies for their passionate endeavours to build successful businesses.

We were also looking forward to supportive policies for local businesses where they are not levied the same taxes as the existing big players in the market are. Policies that ease the tax structure for homegrown businesses in government purchases, in state excise, in CST purchases, and in paramilitary purchases should have been implemented to ensure profitable returns to the manufacturers.

Barring a few states, home delivery of alcohol is not permitted in India. However, a few stakeholders have requested the government to allow delivery services within the regulatory framework. What’s your take on this?

Putting the product on the shelf and making it available on an online portal gives it access to a much larger audience and client base. It makes it easier for a discerning client to order and enjoy the product rather than searching for the brand that they want to acquire.

Going digital also has the benefit of providing greater transparency in terms of a better exchange of information. Advisory has been a problem with liquor stores across India, making it more difficult for the customers to gain information about their favourite drinks and new product launches.

A digital platform also strikes a balance between quality and value. For example, Mumbai has implemented and executed the home delivery system, and their SOPs and the surrounding legislation are already in place.

However, our main market as of now is Delhi and it has only allowed delivery for L13 licensed outlets. We still need to clarify how the system would operate. Which raises the question, will the retailers be allowed to do home delivery if there was to be a separate licensing regime? Another question is that will separate entities be brought on board for the deliveries or, the manufacturers themselves will be allowed to tie up with the wholesalers for the same? Hence, online delivery with a structured framework should be put in action.

Delhi government has reduced the minimum age for drinking from 25 to 21. How much will it impact your market growth in the capital?

This was an extremely progressive move by the government and will surely prove to be a game-changer for the business in the coming few years.

Having said that, we are also rightful advocates of responsible drinking.

The consumers falling under the 21 to 25 age bracket, comprising around 12 per cent of India’s entire population will now have the choice to drink in a safe environment, in a legalized manner. A large number of people would be able to buy without being cautious, and this will spur the economic growth of the brewing and distilling companies, of the alcohol distributing centres/retail stores, of the bars and restaurants and even of the sporting events.

What is your roadmap for the fiscal year 2022?

We plan to expand our business to newer territories to strengthen our availability in all the key states across the north in the first half of this year, 2022.

Once we have a firmly wired foothold in these territories, in the second half of the year we will set in motion our launch plans for the key markets in the west and the south. In states such as Mumbai, Goa, Karnataka, etc. to further boost our business. We will also be devising the nationwide expansion of Kimaya.

We will be relaunching Yavira in the north market in the coming months. Moreover, we will also be amplifying the width of our distribution network to make the product more accessible in the existing markets and we are looking at a target of selling about 1.5 million cases in the financial year 2022-2023.

Furthermore, we will be looking at introducing a new age brewing style which should be possible with our new state of the art brewery coming up, that will take shape in 2022. Due to the pandemic and the uncertain lockdown situation in various states, we had put a halt to our plans for expanding the business. Even now, we will take gradual steps and will move forward with our existing plans.

Also, we are researching and working on some exciting new beverage categories, which we intend to introduce by this year itself.