Home/ Features/ The pandemic spurred its growth, and the Russia-Ukraine conflict has spawned more opportunities for this sector

The pandemic spurred its growth, and the Russia-Ukraine conflict has spawned more opportunities for this sector

The Indian pharmaceutical market has shown remarkable growth during the toughest times ever worldwide, and even the Russia-Ukraine war has turned out to be working in its favour. 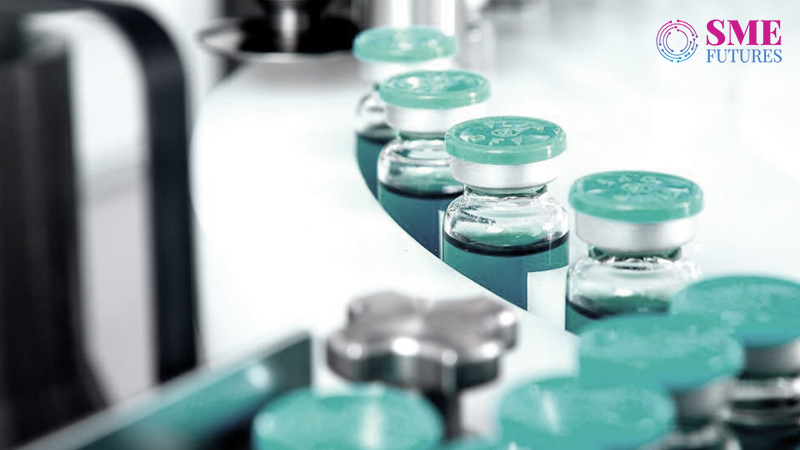 Leading experts weigh in on growing India’s economy in 2022

How technology is changing the landscape for businesses in 2022

Looking back on 2021; how it fared for women start-up owners and their plans for 2022

The Indian pharmaceutical industry has been booming tremendously over the last few years, especially during the pandemic. When every other industry across the world saw restricted growth due to the unprecedented lockdowns, the global pharmaceutical sector was growing exponentially. Additionally, where the recent Russia-Ukraine conflict has impacted several Indian sectors negatively, for the pharma sector the impact has been mostly positive.

Being the third-largest producer of pharmaceuticals in the world by volume and 14th by value, Indian pharma manufacturers supply over 50 per cent of the global demand for various vaccines. Which extends to 40 per cent of the generic demand in the US and 25 per cent of all medicines in the UK. The domestic pharmaceutical industry includes a network of 3,000 drug companies, 80 pharma clusters and approximately 10,500 manufacturing units.

The pandemic induced its growth

According to industry experts and various reports, the Indian Pharma Market (IPM) grew aggressively during the second wave of COVID-19. Going by the total sales audit data from IMS Health, a pharmaceutical market research firm, the sharp increase in COVID-19-related sales resulted in 59 per cent year on year (YoY) growth of the IPM in April 2021 vs 16 per cent YoY in March 2021.

Speaking about the pandemic induced growth of the pharma sector, the Founder & MD at Gangwal Healthcare, Anil Jain says, “This industry strapped up its gears during the COVID period and directed funding to ensure a vaccine for it. The onset of the pandemic resulted in more raw products being bought from the Indian market. Since then, with the support of the government, we have made huge strides in biopharma. The Indian pharmaceutical industry has greatly strengthened its global footprint in the past couple of years.”

The pharma growth story continues even after the massive second wave of the pandemic.

Consequently, the domestic market is on an upward trend.

Taking the numbers into consideration, IBEF estimates that the domestic pharmaceutical market was valued at US$ 42 billion in 2021 and is likely to reach US$ 65 billion by 2024 and by 2030, it may further expand to reach US$ 120-130 billion.

Masurkar adds, “The domestic formulation market growth is gradually coming back to normalcy and with the cost pressure reducing we can expect to see a better outlook in 2022 as compared to the second half of 2021.”

It is fairly evident that the second COVID-19 wave drove market growth. However, post the second wave, there has been a slight slowdown in the market as well, as the growth numbers projected were heavily based on the forecasts that were made when COVID was at its peak.

For instance, there was a slight decline in March 2022, sales. According to India Ratings & Research estimates, sales of COVID-19 related drugs fell by 7 per cent y-o-y which contributed 33 per cent to March 2022 monthly sales. While, overall sales volume for 4th quarter FY22 fell 3 per cent FY22.

Experts opine that the growth is a little slow now but that is normal.

Talking about the present scenario, a pharma distributor, Vivek Jaiswal, Founder and CEO of Saveo says that COVID led to stock piling. “Pharmacies were over-stocking. And there was an uptick in the preventive medicine purchase behaviour of the patients. Post the COVID wave, the sales of pharmacies have been reduced. As the COVID cases went down, there were lesser patients, so there were lesser OPD visits as well. Which eventually led to lesser purchases of medicines. Also, preventive stocking of medicines also leads to lesser new purchases,” he says while elaborating on the market cycle.

So far, the impact of this cycle can be seen on the supply chain as well.

The Russia-Ukraine conflict has negatively impacted various industries. The Indian pharma industry too has been facing varied consequences.

And these consequences have been pretty positive, even when the declining exports to Ukraine have been an obstacle. According to the available data, India exported pharmaceuticals worth US$ 182 million to Ukraine in FY 2020-21, but it has been slowing down as of now.

Jain from Gangwal Healthcare says, “Due to the conflict, the pharma industry is bound to take a hit on their exports this fiscal year. The pharma industry players are worried about the long-term effects of this conflict if it is not resolved quickly. Because medicines are not included in the sanctions that have been imposed, the Government of India has permitted us to continue exports.”

Other impacts are being observed as the prices of fuel/oil are rising in India resulting in inflation in many forms. “Since Russia is a major producer of petrol/oil, the prices of a few raw materials/excipients are going to rise as they are derived from petroleum. Any increase in the prices of raw materials increases the overall cost and the MRP of the products,” says Jaiswal from Saveo.

“Recently, even for DPCO (Drug Price Control Order) products, the price rose by an 11 per cent average which is not a regular event in pharma, though this is linked to the increase in the prices of raw materials by the Chinese manufacturers,” he further adds.

But on the other hand, the experts believe that the conflict seems to be a good opportunity and is opening many avenues for the Indian pharma sector as many western countries have discontinued trading with Russia for its pharma needs.

Masurkar speaks about the positive aspect of this conflict and says that it has opened a broad avenue of opportunities even in the case of Ukraine. “As far as Ukraine is concerned, there is already a massive shortage of medicines in the country due to the war with Russia. Therefore, Ukraine may also walk along the same lines as Russia and ease the registration procedure to get more medicines from India,” he points out.

”However, the scope in Russia will be more as Ukraine will be getting help from the western countries,” he adds.

Is India eying a pharmaceutical expansion?

In the global pharmaceutical sector, India retains ample space by providing most of the generic drugs with an almost 20 per cent share worldwide.

“A lot of pharma companies across the US, France, Germany, and the UK have halted the export of any non-essential drugs to Russia. While continuing the supply of critical medicine, these companies have suspended investments, promotional activities, and new clinical trials in Russia. As more companies withdraw, Indian pharma companies have a chance to fill in the gap and replace the foreign companies,” Jain affirms.

He further adds, “While facing the bombardment of sanctions from the western countries, Russia is looking to enhance economic engagement with the non-European countries. On the issue of payments and banks, the Indian pharmaceutical companies have also suggested to the government to accept payments in Russian currency which would enhance the trade further.”

It can be concluded that this conflict has provided more opportunities than obstacles for the Indian pharma sector, and this could ignite the growth of the IPM. As Masurkar points out, “Russia is now being isolated by the west so it will now primarily look to the east (India, China and Vietnam) for pharmaceutical products. India will be one of the key markets to supply pharmaceutical products to Russia.”

“Also, there may be a fast-track registration of Indian pharma companies in Russia since the supply chain in Russia has been badly disrupted due to the ongoing crisis and economic sanctions by the west,” he adds.

Covering 30 to 40 per cent of the total Indian pharma industry, SMEs are vital to the growth of this sector.

But whether their growth has been taken care of or not is the big question.

During the pandemic, the SMEs in the pharma sector had to face many challenges including high input costs, lower capacity utilisation, high-cost shipment and working capital constraints and other short-term disruptions as well. However, the increased demand for exports and the domestic manufacturing of COVID-19 related drugs paved the way for their recovery and growth.

Considering the SMEs and MSMEs in the pharma industry, the Government of India has released the ‘Strengthening of Pharmaceutical Industry (SPI)’ scheme and an allotment of Rs. 500 crores has been made for the fiscal years FY 21-22 to FY 25-26. Of the three objectives of the scheme, one is to upgrade the production facilities of the SMEs and the MSMEs to meet the national and international regulatory standards. This will be done by providing interest subvention or capital subsidy on their capital loans, which will facilitate the growth in volume as well as in quality.

Speaking of how this scheme can help the MSMEs to tackle several challenges, Jain from Gangwal Healthcare says, “This will ensure that these companies can enter the global market which will further provide growth and sustainability to the MSMEs. To facilitate growth in volume as well as in quality, capital subsidy on capital loans is included in this scheme and this will greatly resolve the capital challenge for the MSMEs while ensuring that they can divert certain funds towards expansion. With this scheme, the MSMEs have a huge backing and advantage to ensure sustenance and expansions.”

Calling India, the ‘pharmacy of the world’, Jaiswal from Saveo asserts, “Currently, the Indian manufacturing hub is highly dependent upon China for raw materials. Even a small change in raw material costs leads to a huge burden on the manufacturers. This scheme will certainly help in making India “Atmanirbhar” in manufacturing raw materials and launching the new set of generics which is going to make the Indian pharmaceutical industry a US$ 100 billion industry by 2025.”

Masurkar from Endoc believes that this scheme will not only improve quality but will also ensure the sustainable growth of the clusters and will further facilitate growth in volume as well as in quality.

In the early part of last year in June 2021, the FM announced an additional outlay of Rs. 197,000 crores that would be utilised over five years for the pharmaceutical PLI scheme in 13 key sectors. Also, to achieve self-reliance and minimise import dependency for the country’s essential bulk drugs, the Department of Pharmaceuticals initiated a PLI scheme to promote domestic manufacturing by setting up greenfield plants with minimum domestic value addition in four separate ‘Target Segments’ with a cumulative outlay of Rs. 6,940 crores from FY21 to FY30.

India’s domestic pharmaceutical market is estimated at US$ 42 billion in 2021 and is likely to reach US$ 65 billion by 2024 and further expand to reach approximately US$ 120-130 billion by 2030. Along with that, medical spending in India is projected to grow from 9 to 12 per cent over the next five years, leading India to become one of the top 10 countries in the world in terms of medical spending.