Indian MSMEs have been hit hard by high inflation, but no policies changes and high repo rates have brought relief. 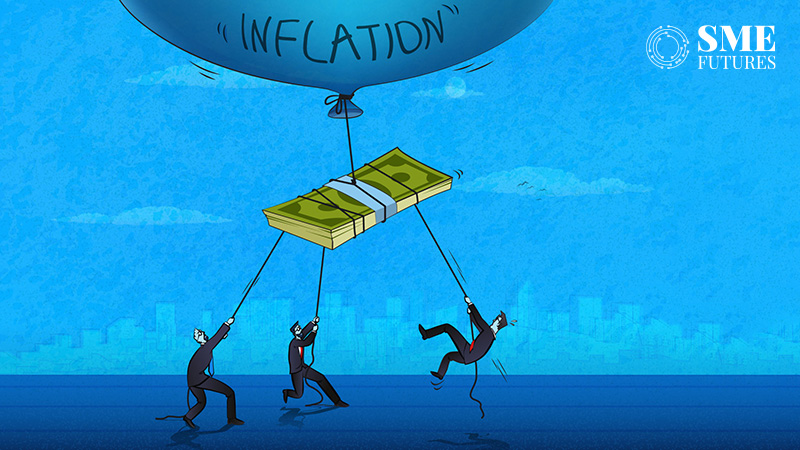 Moonlighting: How unethical or justified is it

“I had to decrease the production by one-third of the full production capacity,” laments Pankaj Dhamija, a footwear maker in Delhi.

Just when Indian economy was recovering from the pandemic breakdown, inflation woes came in. Since, past few quarters, inflation has risen exponentially impeding growth for many. Inflation started skyrocketing in October last year, when it surged to 4.48 per cent from 4.35 per cent in September 2021. This year, following entering into the second quarter of FY22-23, the country witnessed the highest annual inflation rate since May 2014. This increased to 7.79 per cent in April 2022, exceeding market expectations of 7.50 per cent. For the fourth month in a row, inflation remained above the central bank’s two to six per cent tolerance limit.

Consumer Price Index (CPI) and Wholesale Price Index (WPI) are the two key parameters that analyses inflation on retail and wholesale level. Lately, both of them breaking records.

This was the highest reading since December 1998, and it coincided with a broad-based price increase caused by the disruption in global supply chains caused by the Russia-Ukraine conflict. Wholesale prices rose 2.08 per cent month over month in April, following a 2.41 per cent increase in March.

Furthermore, retail inflation in India, as measured by the CPI, has risen to 7.9 per cent from 6.95 per cent in February 2022, according to data from the Ministry of Statistics and Programme Implementation (MoSPI). In April, annual retail inflation was the highest in nearly 8 years.

MSMEs felt the most brunt

The current situation has had a far greater impact on small and medium-sized businesses than suggested by the government’s current retail or wholesale inflation rates. A study by Mumbai-based SP Jain Institute of Management and Research (SPJIMR) suggests the same.

The study reveals that Indian businesses are experiencing a significant rise in their operating cost and are responding with a price hike to avoid losses – a strategy that may not be sustainable.

Meanwhile, the surge in operating cost has affected the SMEs differently based on their sectoral affiliation, as well as their size. For instance, the survey reveals that the manufacturing enterprises seem to be bearing the brunt of the cost increases reporting an average cost increase of 24 per cent.

“Prices are escalating like anything. All the chains of events has compelled many small and medium scale manufacturers like me to stop or minimise their production lines,” says Dhamija.

Whereas service enterprises reported an average cost increase of 14.4 per cent. This would impose a strain on an economic strategy that relies on a manufacturing-led industrial recovery, the study found.

Speaking of the impacts, Pradeep Multani, President of PHDCCI comments, “The inflation along with the shortages of certain raw materials owing to the supply chain disruptions and the lack of adequate availability of freight containers and rising freight charges have become a huge challenge for MSMEs. This scenario is impacting the production possibilities and anticipated sales volumes and posing a challenge to the small businesses to operate,”

At the same time, finance experts feel, cash flows are drying from the market. “The current trend is–pressure on operating costs compels SMEs to increase overall prices. Which in turn have made it difficult to compete in the market. Another thing is that cash flows have gone down. And the average turnaround time for receivables has gone up resulting in a rise in overall costs and depleting margins,” tells us Gaurav Gupta, Director at Consolidated Capital Investcare (CCI) Pvt. Ltd.

In the current scenario, the most pertinent question is why India is observing high inflation trend?

The majority of small business owners believe that rising operating costs will result in higher prices for raw materials, fuel, and labour. The answers are many, but first and foremost we will pin it on geopolitical issues and rising crude oil prices.

“Owing to the geopolitical distress and its economic implications, the rise in the oil prices and other commodities are causing the rise in inflation,”

Pankaj Gupta, former president at Indian Industries Association (IIA) observing the inflation trends, tells us that both the pandemic and Russia-Ukraine conflict fuelled the inflation. As MSMEs facing the consequences, he says, “These are the main reason behind the pause in Exim trades, the growth and sustainability of SMEs are at stake. India depends too much on imports. We depend on other regions for solar cells, and electronic chips, although we have PLI schemes for inhouse manufacturing still it will take more time for us to get fully independent,”

The aftereffects of the pandemic, disruption of exim and by-product of these two ie high prices has created ripples. “Inflation All these reasons have led to scarcity of manufacturing component. Decrease in production. Which has resulted to rise in prices and further decrease in demand. Which ultimately again turned down production and prices soared,” said Dhamija.

Various data have consistently shown that the majority of MSMEs’ incomes have decreased while their expenses have increased.

That is the very same segment, for which RBI has refrained from raising interest rates for almost two years. But with inflation out of control, RBI hiked repo rates twice–by 40 basis points in May 2022 and by another 50 basis points recently, to mitigate the situation.

However, a nationwide survey done by C Voter reveals that people, more than 51 per cent, opines that the RBI moves would fail to tame inflation.

Commenting on the same line Dhamija touted twice rate hikes as double inflation. “This increase in repo rate is nothing but double inflation for small and medium manufacturers of the country. As SMEs have already been dealing with pandemic induced losses and stunted growth, a step like this has increased the burden on a small-scale manufacturer who has taken various loans for their business, and on those who were thinking of taking loans to start a business,” he says.

The repo rate is raised as a tool to inflation, however, it also means that EMIs are going to rise as well. In such scenario, small businesses that depends on loans may have difficult time down the line.

Weighing in Tarun Soni, Head of Finance at Bizongo, a B2B e-commerce platform says, “For any MSME seeking to expand their business, and borrow loans to fund these operations, the rise in interest rates will be tough to contemplate,” he explained that the increased cost of borrowing will impact the working capital of MSMEs.

“The RBI has established in its studies that an increase in the policy rate by 100 basis points directly leads to a decline of 1.95 per cent in credit demand,” he adds.

How are SMEs coping?

Indian SMEs are resilient in nature, and they have been coping up taking various methods. According to the SPJIMR study, few enterprises have chosen not to increase their prices, despite rising costs. But others have done otherwise.

To cope inflation, businesses have resorted to price increase, in anticipation of future cost increases and/or in line with competitor’s actions.  Quoting the study, Kumar Shekhar, Vice President–Member Operations at Tide, a fintech, states, “In response to this, some are raising the prices of their products and offsetting the rising cost to customers – a practice that may not be sustainable in the medium or long term. This is also leading to narrowed profit margins for these enterprises.”

At the same time, SMEs are laying off to balance costs. Startups are one example of it. Dhamija tells us that he had to let go some of his staff, just to cut off costs. “In addition, we had cut the production capacity due to low demand in the market. I also had to lower the marginal profit for the sake of selling the manufactured good,” he tells us.

If you have noticed, the biscuits you eat, might have shrink in size. It’s because FMCG players have decided to reduce product weight, rather than cutting price items to cope up with inflation.

They have resorted to single-digit price increase on some large packs and launching ‘bridge packs’, as they seek to overcome the impact of commodity price rise and unprecedented inflation.

Besides, they are also using economical packaging, recycled products, and cutting spending on advertising and marketing to counter sudden spur in costs due to geopolitical crises.

Homegrown FMCG maker Dabur India has responded to this challenge with a mix of pricing actions and cost control measures, said its CEO Mohit Malhotra.

“In the urban markets, where the per capita income is higher and consumers have the spending power, we have taken up prices in larger packs. In the rural markets, on the other hand, where LUP packs are sold, we have seen grammage reduction to protect sacred price points like Re 1, Rs 5 and Rs 10,” he said to media.

Similarly, FMCGs have reduced the grammage of their products available at popular price points.

What can SMEs do?

There is no doubt that inflation has massively hit SMEs after pandemic. Past eight months, the sectors are witnessing haphazard growth. At the same time, the stakeholders unanimously believe, the prices are not going to go back to the prior levels.

“Needless to say, everyone would want the inflation to go down however the industry and the analysts foresee a consistently high rate despite the efforts put in the RBI. The global market slowdown seems to add fuel to the fire, and we do not anticipate any short-term relief,” says Gupta.

However, other suggests waiting and watch.

“At this juncture, ease of doing business and adoption of digitisation can support MSMEs with procedures and compliances, tax registration, marketing, and branding initiatives, and reducing the time required to obtain credit and the overall costs of doing business. Digitisation can also help in delivering capital at the point of demand and helping businesses better understand and manage their cash flow,” suggests Shekhar.

In addition to the policy changes, MSMEs expects more measures from government side to better address the challenges posed by high inflation.

While there are some factors that everyone must agree on, it must be acknowledged that India is currently in unprecedented circumstances. Not only are we are facing apprehensions due to geopolitical crises and increasing costs of fuel, but we are also amid a heatwave which has damaged crops, and the impact of the pandemic is still being realized. Therefore, there are going to be many learning lessons for stakeholders across public and private institutions.