Home/ Union Budget/ Real estate budget 2022: Affordable housing and urban planning have received the most attention, while there has been no GST rationalisation

Real estate stakeholders have welcomed the allocation of Rs. 48,000 crores towards affordable housing. However, the fact that there have been no changes in the GST, or any tax relaxation has disappointed quite a few of them. 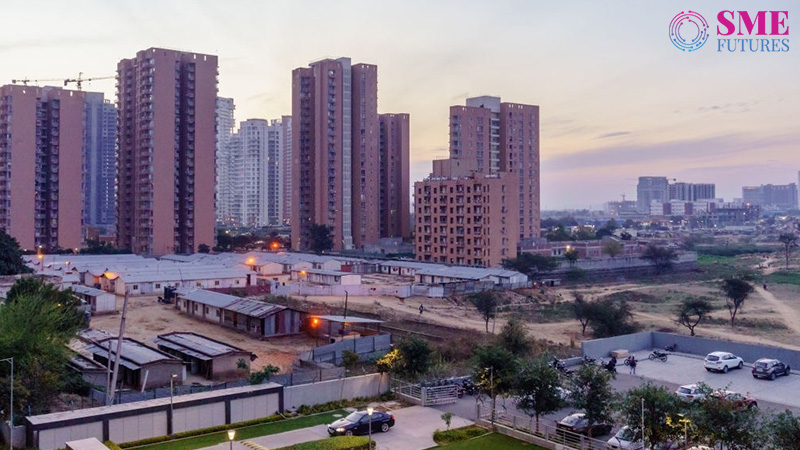 Budget 2022 | Live Updates: Will it be the booster dose India is waiting for?

The real estate sector let out a collective sigh of relief as the Finance Minister announced some pro-recovery and pro-growth steps for the sector in the Union Budget 2022-23. The entire economy has suffered a lot due to the pandemic and the lockdowns. As we mentioned in our earlier report, the demand and supply in real estate remained largely hit during the first two months of Q2-2021 when most states put in place fragmented lockdowns. This sector was desperately waiting for this revival kit, and it has welcomed the same in this budget.

Allocations for the real estate sector

This year, the FM has announced the allocation of Rs. 48,000 crores for its flagship ‘housing-for-all’ scheme, under the Pradhan Mantri Awas Yojana (PMAY), which stood at Rs. 47,389 crores as per the revised estimates (RE) last year.

The Urban Rejuvenation Mission: AMRUT and the Smart Cities Mission have been allocated Rs. 14,100 crores, while they got Rs. 13,900 crores (RE) last year. The Atal Mission for Rejuvenation and Urban Transformation (AMRUT) scheme that was launched in June 2015 is targeted at boosting urban infrastructure across 500 towns and cities.

Along with this, the FM announced that 60,000 houses will be identified as the beneficiaries for the PM Awas Yojana in the rural & urban areas. A high-level committee of urban planners and economists will be formed for recommendations on urban capacity building, planning implementation, and governance. And 5 existing academic institutions for urban planning will be designated as Centres for Excellence with an endowment fund of Rs 250 crores.

In its previous reports, SME Futures had written about some of the expectations that the real estate experts had from the Union Budget of 2022. Let’s see if those expectations have been met.

If there was one thing that was being expected and looked forward to by every expert, it was affordable housing.

Calling it a futuristic budget, President of NAREDCO Maharashtra and MD of the Runwal Group, Sandeep Runwal says “For the first time the FM has sought to transform the real estate sector by bringing in transparency and efficiency in the business.”

Speaking about the allocations and the housing projects, he adds, “This will boost the affordable housing segment and will help to achieve the PM’s vision of Housing For All. Also, it will ensure that more homebuyers get to avail of this benefit.”

Austin Roach, MD at RBD Shelters feels that the budget is positive and will help in dealing with the short-term challenges and lay the edifice for future growth.

“The government has continued its focus on the affordable housing segment by giving a significant allocation to it. It is important that the sector continues to develop high-quality housing for all segments of society and such positive initiatives will go a long way in enabling the developers to create high-quality products in a cost-effective manner,” he says.

Speaking in the same vein, CFO and Executive Director of Alpha Corp, Santosh Agarwal says that the budget outlay will provide the much-needed impetus to the housing demand in the affordable segment. “With visionary growth in the affordable housing sector, this allocation is for the completion of the construction of 80 lakh houses and for the reduction of the time required for construction-related approvals. On the other hand, the facilitation of tier II and III cities would help realise the potential in these regions with opportunities for all in terms of employment and sustainable living,” he elaborates.

Adding in his views, Mukul Bansal, Director at Motia Group comments, “The dedicated allocation reflects the government’s strengthened commitment to Housing For All by 2024. Besides, the government’s impetus on digital transactions will infuse more transparency into the real estate transaction system.”

Sharing similar views, Rahul Singla, Director at the Mapsko Group, says, “There was a clear focus on affordable housing and government support has been promised on land and construction-related approvals. However, more clarity is awaited as to how the real estate industry will actually benefit from the Union budget 2022.”

This aspect has garnered a fair bit of attention in the budget. The government has made two main announcements as far as urban planning is concerned.

The first is about its intention to appoint a high-level panel for urban planning. And the second one is about designating the five existing academic institutions as the Centres for Excellence for urban planning with an endowment fund of Rs 250 crores.

Commenting on the announcements, Kaushal Agarwal, Chairman at The Guardians Real Estate Advisory says that these steps will prove pivotal for the real estate sector as both the emerging urban landscape and the decaying city infrastructure need a complete overhaul. “The emphasis on promoting the use of public transport in urban areas is futuristic, considering the traffic and pollution scenario in all metro cities,” he points out.

Gururaj Bhat, CEO of Karle Infra Pvt. Ltd. also appreciates this announcement, saying, “The constitution of a high-level committee of reputed urban planners, and economists to suggest and support the states to implement the modernization of building bylaws, to come up with town planning schemes, for capacity building and for planning and governance is the need of the hour.”

“This is definitely a solution for easing out the existing infrastructure bottlenecks in the planning for the future and for the development of the present metro and tier-1 cities and will make the other cities in tier-2 & 3 undergo world-class development,” Bhat adds.

Manish Jaiswal, Group COO at the Eldeco Group also feels that urban planning took the centre stage in the Union Budget. “Announcements around urban planning will provide an impetus to the real estate sector. We are glad that the government has a balanced focus on tier 1 and tier 2 cities. Creating mass transit systems will bridge the gap between the megacities and the smaller ones,” he says.

“Besides that, the single-window environmental approvals and better coordination between the centre and the states for approval processes are welcome steps and will further help to achieve this goal,” he adds.

Ease of doing business to boost the sector

The overall aim and focus of the Union Budget 2022-23 were digitalization, which was clearly evident. Most real estate stakeholders opine that digitalization will help in their sector’s growth as well.

Runwal opines that digitalization will bring transparency and efficiency in the sector. “‘Ease of Doing Business 2.0′ is a step in the right direction and the continuous efforts to promote the same along with digitization will help the economy and the real estate sector business, going forward. The single window clearance mechanism too will go a long way in improving the ease of doing business in India. This should include more dynamic aspects and make India a more investment-friendly destination,” he says.

Bhat of Karle Infra also lauds the proposal to undertake reforms in the Customs Administration of SEZs and the implementation of a fully IT-driven Customs National Portal with a focus on higher facilitation and with only risk-based checks.

“This will considerably ease the process of doing business by SEZ units. We understand that this reform will be implemented by the 30th of September 2022,” he says.

Jaiswal of Eldeco Group also adds that the single-window environmental approvals and better coordination between the centre and the states for approval processes are welcome steps and will promote the growth of the real estate sector.

Another important demand was tax relaxation and GST rationalisation. However, this budget has not provided the same. It has not come up with any tax relaxations or incentives for homebuyers from the lower and middle-income groups either.

Mohit Nirula, CEO at Columbia Pacific Communities feels disappointed by this, saying, “There were no announcements about making homes in senior living communities more affordable or any rationalisation of the high 18 per cent GST levied even as the collection for January 2022 touched a record high. We are disappointed that none of the initiatives announced bring succour to the demographic we serve – senior citizens.”

Speaking on taxation, Nirula says, “Over the past many decades, we have gotten used to what can best be described as the “tinkering” of the direct and indirect tax structure, or Impex subsidies, which are industry specific. But while these measures were welcomed on news channels and by the sentiment-driven stock market, they make no real impact in the long run.”

Pointing towards the uncertainties and the unemployment caused due to the pandemic, the Founder and MD of the Suratwwala Business Group Ltd., Jatin Suratwala outlines some of the expectations that the developers and homebuyers had from the Union Budget 2022, which he believes were not met.

“For developers, it meant a rational capital flow source to keep up the work process + relief on GST (a single slab, relaxation in under-construction realty, and reduction in taxes on key raw materials) to reduce the overall property cost and to push demand. It also included granting industry status to the overall real estate sector and having a single-window system,” he explains.

“For homebuyers, they were expected to get more tax sops and higher relief on home loan rates + relief on a second home. In the tax sops, the specific areas were standard deduction to increase the cash available to buyers and relief on long-term capital gains besides a minimum tax rebate of Rs 5 lakhs against the current limit of Rs 2 lakhs,” Suratwala further elaborates.

“It was expected that this budget would bring relief to the sectors that have long-term implications. It instead seems to have veered off towards infrastructure and affordable housing for the poor,” he points out.

In addition to tax relief and GST changes, another long-pending demand that the real estate stakeholders were expecting would be met in this budget was industry status for the real estate sector.

Agarwal of The Guardians Advisory expresses his disappointment at this not having been done, saying, “The budget has missed the opportunity to accord the long-pending industry status to the real estate sector as a whole; currently the same has been accorded only to affordable housing. The fulfilment of this long-pending demand would have helped the developers to raise funds at lower costs.”

Overall, the Union Budget 2022-23 has elicited mixed reactions from the experts and stakeholders of the real estate sector. The allocations and construction plans for affordable housing and urban planning have been appreciated. But the lack of tax relaxations and GST rationalisation in it will pinch homebuyers and developers. Meanwhile, the long standing ask for industry status for this sector is yet to see the light of day.