Home/ Focus/ MSME’s credit demands are reaching the pre-pandemic levels, but they still have some more ground to cover

Bank credit to micro and small enterprises (MSEs) in February 2022 jumped 8.4 per cent to Rs 13.12 lakh crores, the RBI reports. 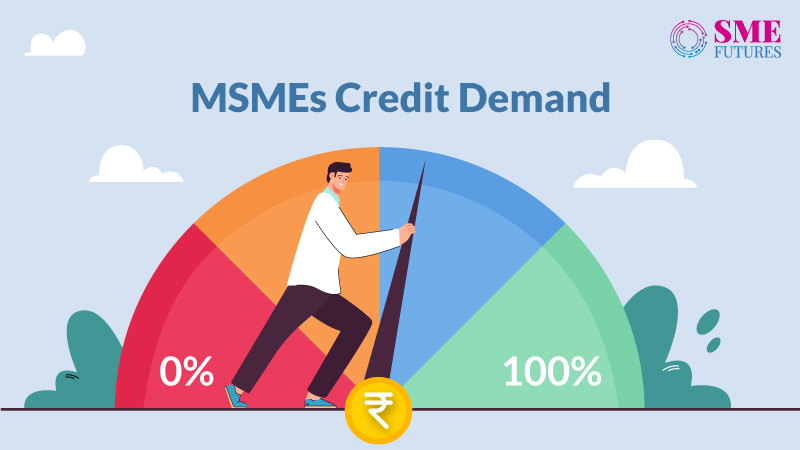 The MSME sector, which accounts for 30 per cent of India’s GDP, was particularly hard hit by the pandemic. MSMEs have gone through several stages of survival and recovery following the pandemic.

One such phase was dealing with credit or loan requirements. Any small or medium-sized business needs MSME loans to satisfy their working capital needs, to manage or boost their cash flow, and to expand their business, among other things. Most banks and non-bank financial institutions (NBFCs) provide unsecured loans to SME and MSME borrowers who do not provide any collateral or security.

Despite being a critical component of our country’s economic growth, the development and growth of MSMEs is frequently hampered by a lack of financial literacy.

To add to that, small businesses have had to face numerous challenges in maintaining their creditworthiness during the pandemic. However, a research report by NeoGrowth shows some positive signs, stating that the credit demand among MSMEs has reached or is about to reach the pre-covid levels. Let’s take a look at its findings.

Support was needed during the pandemic

Most MSMEs faced the dilemma of maintaining their credit scores during the pandemic. According to a survey, 97 per cent of MSMEs were concerned that non-payments would have a negative impact on their credit scores. Furthermore, 3 per cent of them were severely impacted by the lockdown and the decreased consumer demand.

According to the report, MSMEs required more than just a lender to manage their business operations as they navigated the pandemic.

Going digital was the only option

Keeping up with technology advancements and getting the right services to transform their businesses to compete against large corporates were the major concerns of the MSMEs.

So, most MSMEs focused on the aspects that were in their favour and reinvented themselves. Talking about the digitalisation among MSMEs, Arun Nayyar, Director & CEO of NeoGrowth says, “The pandemic fast-tracked the digital transformation of MSMEs, and many adopted digital-led tools for business growth.”

“MSMEs across India have witnessed the power of these digital tools, whether in order intake, order fulfilment, pricing, delivery, or payment settlement, etc,” he added.

Most of the MSMEs were either local kirana stores, small shop owners, or traders across segments such as grocery, pharmacy, FMCG retail, apparel, etc. who were yet to digitize some or most of their business operations. For instance, 76 per cent of MSMEs in Hyderabad primarily use digital payment modes, which is higher than the percentage in the other cities that were surveyed, followed by Bengaluru & Mumbai.

Overall, 66 per cent of MSMEs became digitally strong, out of which 64 per cent used digital means to engage with their customers, while 67 per cent digitised their GST and filing operations. Subsequently, digitisation has helped MSMEs to move from survival to revival in terms of maintaining their credit demands and repaying their loans.

Is the credit demand back to the pre-Covid levels?

Citing the revival of the MSME’s credit demands, Nayyar comments, “The credit demand from MSMEs is now back to the pre-pandemic levels and these indicators are the visible green shoots in the economy. This ‘New Normal’ has also made it incumbent on us, at NeoGrowth, to innovate our offerings for the future of small businesses in India.”

The survey cites data that has been collected over two years between March 2020 to March 2022 from MSME customers across 88 unique industries. After surveying over 40,000 MSMEs from across 25 cities, it says that while the MSMEs’ credit demand is back to a healthy level, it is yet to reach or cross the pre-pandemic demand level. It further points out that 75 per cent of MSME borrowers who upgraded their pre-pandemic loans went for a higher amount with an 80 per cent average increase in the principal loan amount.

While there was a 95 per cent revival in the credit demand among MSMEs post the first wave of the pandemic in March 2021, the revival in credit demand post the second wave was just 85 per cent in March 2022. Bengaluru and Chennai were the only exceptions among the metro cities, witnessing loan demand levels at 124 per cent and 102 per cent respectively of the pre-Covid levels. Also, the infrastructure sector led the way in recovery, with the revival of its credit demand at a 114 per cent of the early 2020 levels, followed by the fast-moving consumer goods and retail sectors, with a 103 per cent revival level. However, there are other sectors that are yet to reach the pre-Covid credit demand levels.