Home/ Guide/ Human Resource/ Moonlighting: How unethical or justified is it

Moonlighting: How unethical or justified is it

Quite a lot of people are choosing to engage themselves in two jobs simultaneously and stealthily. Naturally, the employers are taking strong exception to that. Many employees are being shown the door. Some experts feel that the employees should be honest about it, while others say that the organisations themselves should either engage them optimally or give them the freedom to sail on two boats 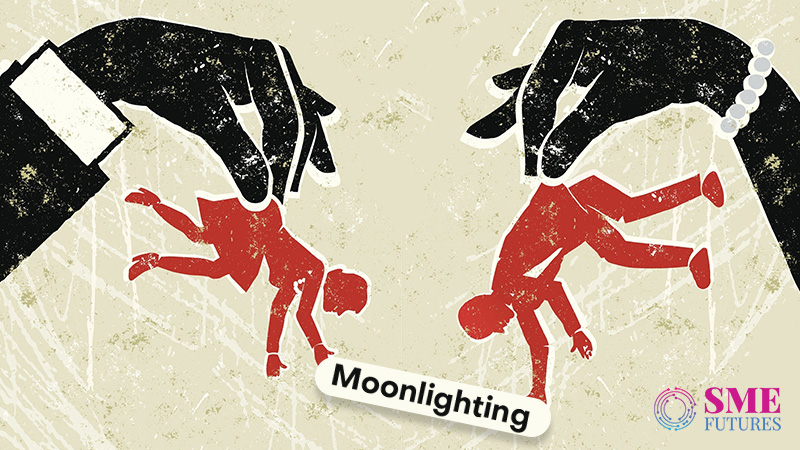 Companies are on a sacking spree. They are taking stringent steps to put a stop to the culture of ‘Moonlighting’ — a term that has been resonating through the walls of tech companies for quite some time now. Moonlighting involves pursuing a second job while doing a primary one at the same time and being secretive about it. It is what people call their second job, which is in addition to their regular paying job.

This concept has long been in practice in the West, but it had not affected the Indian tech conglomerates as much until recently.

It all started with Swiggy, an online food delivery service, officially allowing its employees to indulge in moonlighting in their free hours i.e., in the hours that they are not working for them. This soon became a hot topic of discussion after it began trending on Twitter in India. It gained more recognition as a section of people applauded Swiggy’s new policy changes, hailing it as a move which every company should adopt. Recently, Rishad Premji, Chairman of Wipro, went as far as to equate moonlighting with cheating the company that one works for. Wipro has since laid off 300 employees after discovering that they had been working with some rival companies. And this is not something that only Wipro is doing.

Many of the top gig companies like IBM and Infosys have spoken out against moonlighting.

IBM, the global tech giant, has called the practice unethical in terms of professionalism and something that goes against the company’s policies. IBM’s managing director for South Asia and India, Sandip Patel, said during a company event,” …notwithstanding what people can do in the rest of their time, it is not ethically right to do that (moonlighting).”

Factors behind the sudden rise in moonlighting

Moonlighting as a concept has been there for a long time but it has mostly been under the radar until recently. People have been taking up freelance opportunities since long, but the recent pandemic and the rising inflation have prompted a sudden spike in it.

“The pandemic led to a plenty of job cuts and pay cuts, causing financial burdens. Due to the constant fear of losing their jobs, many white-collar workers as well as start-up employees began to lean on side hustles to earn some additional income to pay off their bills. With the ease of the internet making jobs just a click away and having access to multiple job portals that offer part time stints, quite a few people took to moonlighting as they worked from home during the lockdown,”

The current conditions have facilitated the requirements that one needs to freelance. The ground is now open for various kinds of players from every field to indulge in moonlighting and earn some extra income to survive in this economy.

“The recent financial situation definitely did play a part in bringing about the recent turn of events but the major factors that are prompting a lot of employees to opt for moonlighting are the disparity in salaries between the freelancing opportunities and the full-time jobs along with an increase in the platforms that offer them,”

Why techies resort to moonlighting

After talking to a few techies, we got to know that there are multiple reasons behind why so many tech employees are opting for two jobs. Ritesh Shivdasani, a software developer working with S&P Global in Noida says that for engineers, it’s mostly about acquiring more experience and expertise in their field. He also laments that employees shouldn’t be two timing – taking up two jobs, if it is causing problems for their primary employment.

“There are certain aspects that every engineer looks at for professional and personal growth. Usually, employees have enough time on their hands to manage a part-time job along with their full-time employment, which in most cases they are able to do. The problem arises when a person joins two organisations as a full-time employee and is not able to give his 100 per cent to any of them,” Shivdasani points out.

The 300 employees sacked at Wipro were reportedly working for rival organisations. In cases like these, it becomes outright unethical to do so and this also puts the ones working with integrity and loyalty at their jobs under the bus. “We do have confidential information which we are not supposed to discuss with anyone outside the workforce. We adhere to the company policies and regulations. But in this crippling economy, shouldn’t the companies also focus on improving the salary structure of their employees?” says Ayush Pant, a software test engineer at HCL Technologies in Noida.

For this and many other reasons, Adani and Ambani have signed a ‘no-poaching’ pact. This pact is to ensure that both the companies retain their talent while making big investments in petrochemicals and renewable energy among other sectors.  Most companies have a clause where they do not allow their staff to work for other companies simultaneously.

“The pact will streamline certain processes. There is always the issue of resolving the problems that fall in the grey area, but agreements make things easier and clear for the employer as well as for the employee. There should be proper talks on the what and what not’s of moonlighting, but we are still far away from those,” Shivdasani asserts.

“The freelance or moonlighting culture has been prominent in the West for a long time. During the pandemic, more people started to follow their passions. COVID gave us proof that working from home is something which is possible in India as well. People now have the infrastructure and the time to improve their skills and work towards their passions,” says Pant.

What the experts say

Opinions about the ethicality of moonlighting are mixed. Most employees are aware of their responsibilities and maintain their professional integrity at all times. However, the employees who are opting to sail in two boats at the same time have become a major cause for concern for the big companies that deal with highly confidential data with a huge consumer base.

Harsh Goenka, the chairman of the RPG Group, took the side of Wipro’s Rishad Premji by tweeting, “Wipro vs Swiggy – they just can’t be compared. Wipro deals with Fortune 500 clients for whom data secrecy is sacrosanct.  If the customer finds even a remote chance of data compromise, it will not be tolerated.” And he is right. Big data-based companies can’t compromise with employees who choose to work part-time for another company. It is a matter of privacy and security, which if compromised can be detrimental for the company’s image and brand value.

But the start-ups that don’t deal with such crucial data are quite lenient when it comes to moonlighting. They just expect transparency and loyalty from their employees. After talking to some start-ups, we concluded that most of them don’t think that working part-time is unethical. However, what they do find unethical is employees not being honest about it.

“In my opinion, moonlighting is fine as long as the employee is transparent about his/her role and the time that they spend with all their employers. Needless to say, the confidential information of one company should not be passed on to another. However, in India, there have been instances where employees have indulged in moonlighting without informing their employers, which is ethically wrong and strict action should be taken against them,” Thacker asserts.

“There is nothing unethical about working part-time or moonlighting. It is a matter of transparency, Individuals have the freedom to freelance; they should just be honest about it,”

While speaking about moonlighting during a forum, Rajeev Chandrashekhar, Minister of State for Skill Development & Entrepreneurship, Electronics IT, Government of India, said, “Companies should not pin down their employees and put a lid on their dreams. They should be allowed to do what they want with no restrictions, subject to a contract agreement that cannot be violated. There has been a shift in the workforce’s confidence and the companies that recognize this will succeed. Everyone wants to monetize and create more value.”

A need to find common ground

There is certainly a need to find a common ground. The employer should be more accepting of an employee doing any work outside the company and the employee too should take into consideration the importance of being loyal, honest and transparent about their second vocation.

“Moonlighting has to be contextually debated. For a growing start-up with its own challenges of resources and funding, employees are their lifeline. We can’t afford an employee whose focus shifts from the vision that we are seeing together. Even if someone agrees for moonlighting, it should be with complete disclosure from the employee to avoid conflict of interests later,” Sasikumar points out.

There are other factors at work which make an employee choose a part-time opportunity. One such reason among many others is having no work at times which feels like a complete waste of talent and time for the employee. The management should also assess and address these problems to curb the practice of moonlighting.

“Employees have free time during work hours where they are told to just be active without being given any work. To make this free time productive, many of them take up part-time roles. This issue is also prevalent in the IT industry,” Shivdasani says.

“Moonlighting happens only when an employee is not made to feel that they are engaged. We can’t just pin the fault on the employee, we have to look at both sides of the story. An employee should feel involved in the company’s goals and projects. If you make them feel like they are a part of the goals, they will be interested and will be motivated to work harder. But if you don’t, they’re sure to feel left out and become disinterested and having free time at their disposal, they will look for other opportunities that could lead to their personal growth,” Moolayil points out as he signs off.