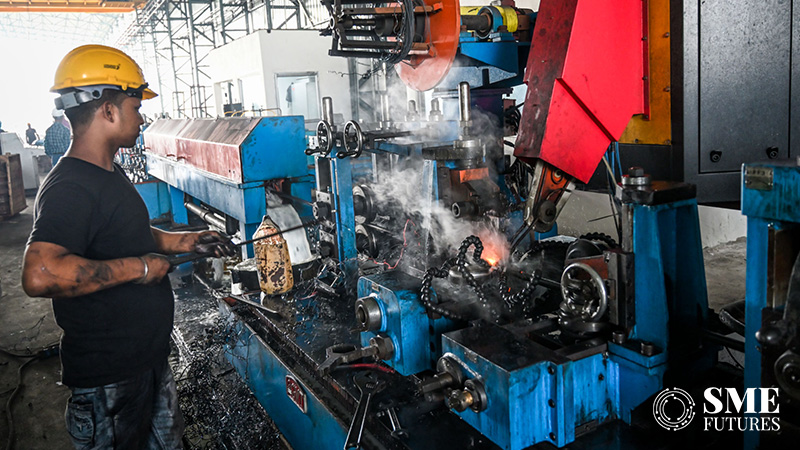 Rising from 53.9 in June, to 56.4 in July, the seasonally adjusted S&P Global India Manufacturing Purchasing Managers’ Index (PMI) highlighted the strongest improvement in the health of the manufacturing sector.

The PMI indices vary between 0 and 100, with a reading above 50 indicating an overall increase compared to the previous month, and below 50 an overall decrease. Sales and production grew at the fastest rates since November 2021 as input costs inflation for the industry softened to an 11-month low, S&P Global said in a statement.

“With incidences of shortages diminishing, the rate of input cost inflation eased to an 11-month low in July, subsequently dragging down the rate of increase in output prices to the weakest in four months,” Pollyanna De Lima said in the statement.

Despite the solid performance in the manufacturing industry, overall job creation remained subdued. “Another factor that constrained hiring activity was future uncertainty. Despite improving from June’s 27- month low, the overall level of business sentiment was muted in the context of historical data. 96 per cent of manufacturers forecast no change in output from present levels over the coming 12 months,” the statement added.

Earlier, services activity in India increased in June as the S&P Global India Services Purchasing Managers’ Index or PMI showed growth in comparison to the previous month, thereby hitting an eleven-year high. In June, the index came in at 59.2, as compared to 58.9 in May.

The acceleration in the services’ growth was broad-based led by improvements in demand following the retreat of pandemic restrictions, capacity expansion and a favourable economic environment, S&P Global had said.

“Services firms noted a substantial upturn in new work intakes at the end of the first fiscal quarter, with the rate of increase improving to the best in over 11 years. Where growth was signalled, survey members commented on strengthening demand conditions, expanded client bases and fruitful marketing,” it had said.

It further added that firms were able to secure new orders despite charging more for their services. June data showed the fastest rise in selling prices since July 2017 as several companies sought to transfer part of their additional cost burdens to clients.

Stronger increases in charges were seen across the four broad areas of the service economy, with the sharpest upturn recorded in transport, information, and communication, it said.

Some companies responded to capacity pressures by hiring additional staff in June, but the vast majority have left their payroll numbers unchanged. Overall, employment in the services sector rose marginally in June, following a decline in May.