According to the stakeholders, the outlook for the real estate sector is positive for the next year. Investments, sales and tech trends will drive the growth of the Indian real estate market. 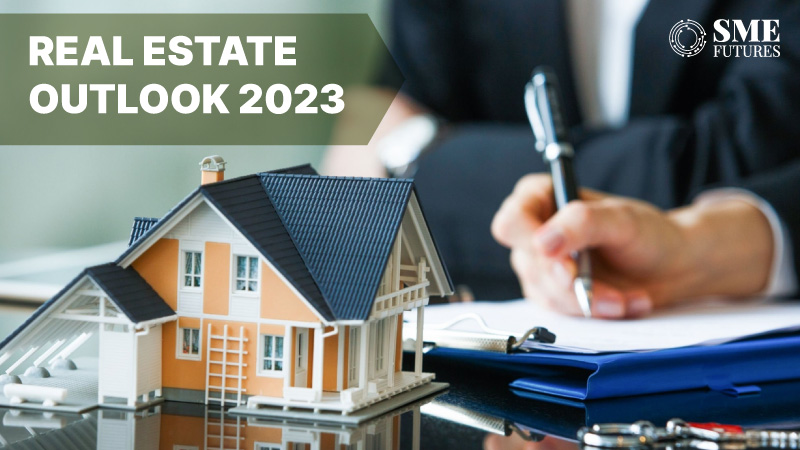 In our review of the real estate sector for 2022, we can say “so far, so good.” Time tested and popularly believed to be immune to market volatilities; the Indian real estate sector has remained faithful to investor expectations.

According to CBRE India, in this year’s third quarter, the sector has shown a consistent performance. It is due to the occupants’ expansion and the release of repressed demand, which is revealing itself despite the economy’s inflationary trends. Given below is a capsule version of how the quarter (and by extension 9M 2022) fared for the sector and the road that lies ahead for it:

Office: There will be a significant recovery in leasing in 9M 2022; the momentum will sustain in the coming quarters, although there could be some impact from global economic headwinds.

I&L: Leasing activity will pick up in Q3 2022; holistic policy initiatives are anticipated to transform the sector in the times to come.

Retail: Further growth in demand is likely in the coming quarters; tier II, III and even IV centers will gain traction as retailers will look at leveraging their spending power.

Residential: Year 2022 is likely to end on a high note for this sector as it continues on its growth trajectory on account of strong homebuyer sentiments.

Also Read: How was 2022 for the key sectors and way ahead

RE Investments: There will be sustained investment activity in Q3 2022; the cumulative investment volume could cross the Rs 6 billion mark, but the rising cost of capital is a potential risk.

How experts look at 2022 and beyond

Unanimously, the real estate stakeholders are of the opinion that positive expectations and the upward momentum have shown that they can sustain themselves and they believe that it will continue like this in the coming year as well.

“The year  2022 has been both interesting and promising for the Indian realty sector. Dawning from the dusk of the COVID period and the myriad uncertainties that came with it, the industry anchored sectors like retail, services and SMEs to name a few. The gradual increase in demand for spaces kept the good sentiment in the market going for investments,” says Ali Kochra, Chairman and MD at Kochra realty.

Kaushal Agarwal, Chairman, The Guardians Real Estate Advisory weighs in, saying, “The surge in demand for housing in the Indian real estate sector despite the backdrop of uncertainty, the looming global recession, and the rising interest rates have proved that there is a genuine interest in housing and the momentum is expected to continue in 2023.”

Impetus to home ownership in 2022

The concept of owning a house, which gained importance in the post COVID-19 scenario, has led to a surge in the sales of houses across the country in 2022.

According to Kochra, the gradual increase in demand for spaces has kept the good sentiment in the market going for investments. However, the year saw a change in product requirements in a way that helped developers to design better homes with better features and enabled them to offer better prices to the buyers. A mix of small and medium spaces with work from home features have gained popularity, which along with the rising demand for smart offices has been a win-win situation for this segment.

Rohit Gera, Managing Director, Gera Developments also feels the same. “2022 has been a good year for the real estate sector which has emerged strongly from the pandemic.  Sales across markets have been robust. This has reignited this very important engine of the economy, bringing in revenues to the state and central governments as well as generating employment and improving the fortunes of hundreds of ancillary industries,” he says.

No impact of the repo rate hike

Following the five times hike in the repo rate by the central bank, the current repo rate stands at 6.25 per cent. Each time the RBI hikes the repo rate, it directly impacts a buyer’s decision to purchase a home. Among its other effects is the fact that the cost of borrowing will become higher, which will add to the overall acquisition costs. However, the experts feel that the repo rate hike has not affected the real estate sector all that much.

Kochra also comments, saying, “Despite the increase in the repo rate, the demand for real estate has only grown stronger. Sales and registration numbers in most cities in the country have been encouraging. In the end, both the customers and the developers have gained from the changing scenario in the real estate sector. I think this has been the year where developers, governments and customers have come together for growth. This year we also witnessed the Supertech twin tower demolition; it essentially symbolized a victory for both the government and the customers. It was famously termed as the Dussehra demolition and was seen as a victory for the customers and for the people who had placed their faith in the judiciary. This has indeed strengthened peoples’ buying confidence.”

Gera too weighs in, saying, “The rise in interest rates has so far not dampened sentiment and with inflation expected to come under control in the near future, interest rates at the current level will not adversely affect the momentum of the industry.”

“Sales across markets have been robust.  This has reignited this very important engine of the economy, bringing in revenues to the state and central governments as well as generating employment and improving the fortunes of hundreds of ancillary industries,” he adds.

NRIs based in the US, the UK and Singapore are investing in larger housing units in their hometowns, having learned from the painful experience of living in space-tight units during the lockdown in India. The Work from Home (WFH) mode becoming a requirement has also been a contributing factor to this trend, according to the experts.

Agarwal of The Guardians Real Estate Advisory touts it as gamechanger, citing it as the reason behind the real estate’s re-emergence as the first choice for long-term investment gains. “This spells exciting times for investors in 2023 as well,” he enthuses.

Prabhakar, Vice President at VNCT Global, says that with the US in recession and due to the job cuts by heavyweights Twitter, Amazon and Facebook, Indian professionals in the United States are rethinking their priorities and are investing in large housing units, be it condominium apartments or bungalows.

“The weak rupee is another drawing factor as the stronger US dollar and other currencies have made it attractive to invest back home,” he says of the residential property boom created by the NRI dollar flow into India.

Kedia-Agarwal attributes the surge in investments to the ease of transactions. According to her, in the post-pandemic world, processes have rapidly moved to online modes, offering investors much transactional ease, even if they are across borders. Also, the recent volatile stock market and the currency benefit of the rupee-dollar exchange have made it favourable for the NRIs to invest in real estate in India.

“A large section of non-residential Indians, who previously saw the stock market as a primary investment resource, have now shifted more to real estate as a form of long-term investment. Also, the rupee’s decline in value against the dollar, heavy returns, good rentals and the improving infrastructure have been the additional key drivers,” she points out.

Kochra is also positive about the investment prospects. “We have seen strong and improved NRI investments in the country and people have also invested in overseas real estate. This year witnessed great positivity in the sector and industry expansion as well, where the growth of one is supplementing the growth of the other. This will lead to improved processes that will lead to the evolution of this industry. The year 2022 in many ways laid the foundation for the growth of this sector, after the slump of 2019 and the ambiguity of 2021. In a way 2023 will have a better scope for the development of the real estate sector if we go by its performance this year,” he elaborates.

In the post-COVID world, there has been a rise in demand for sea-facing homes with large open spaces like balconies, terraces, courtyards, gardens, and with parks in the vicinity. Work-from-home and the hybrid work culture have changed the mindset of most home buyers in the post-COVID era. Owning a home is no longer just an investment but a necessity, given the importance that a luxury residence has come to hold as seen from the wider perspective of people’s work-life choices.

The latest trends show that customer preferences have shifted from premium real estate to a more sophisticated approach. Buyers now want a lifestyle that can seamlessly include the work-from-home option, while not having to give up on the lavishness and comforts of luxury living. These trends are expected to continue in 2023 as well.

Meanwhile, the residential real estate market in India has become more lucrative for ultra-high net-worth individuals (UHNIs) and NRIs as a result of the increased transparency and ease in the investment norms.

Kedia-Agarwal feels that with RERA ensuring transparency and the laws allowing 100 per cent FDI in construction, Indian real estate is witnessing a lot of investment infusions from NRIs. “The new class of ultra-rich people is on a buying spree of luxury homes in global cities like Mumbai, Bangalore, etc. The Indian markets are proving their grit and potential. It is now time for investors to decide if they want to benefit from India’s future potential,” she says.

Real estate developers will also be expanding their operations to non-metro cities in 2023. The most recent example is the announcement of the Mumbai 3.0 project by the Government of Maharashtra (GoM). The government is committed to developing the Neral-Karjat, Panvel and the NAINA region in the Mumbai Metropolitan Region (MMR) as a part of this project. In fact, the numerous infrastructure projects in the city that were stuck due to the pandemic are now expected to resume and pick up pace in the new year. This will change the entire dynamic of the realty sector.

2023 will also see the remote working model, which gave way to a hybrid work structure in 2022, change completely with a full-fledged return to the pre-pandemic norm of work from the office (WFO). Therefore, CRE (commercial real estate), which has been on the rise since last year, is expected to dominate with Grade-A offices in huge demand as big companies are seeking to expand their operations in the coming days.

In conclusion we can say that the real estate stakeholders have every reason to believe that the performance of this sector in the new year is going to be rock steady and robust, especially with the government also stepping in and taking initiatives which will further support and enhance the growth of this sector.