Home/ Interviews/ ‘India Chemicals 2.0 – the country’s chemical industry is at next phase of growth’

‘India Chemicals 2.0 – the country’s chemical industry is at next phase of growth’

With China slowly and steadily making an exit due to environmental concerns, India is likely to become a dominant supplier of dyestuff to the world, says SPCFL CMD Punit Makharia. 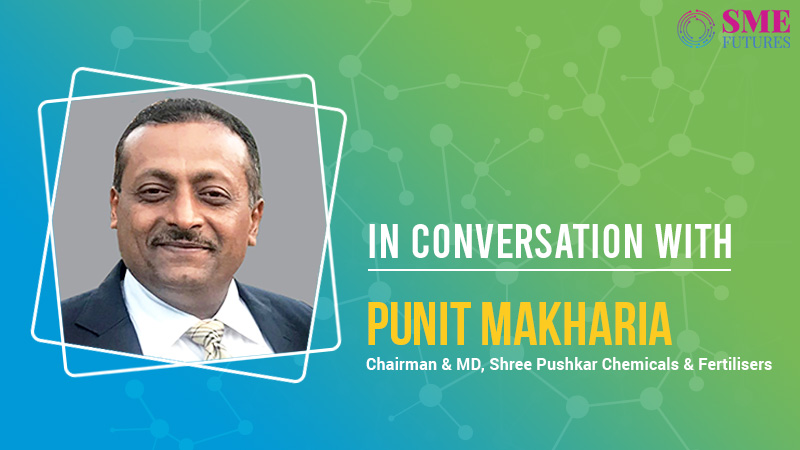 Why are financial advisors imperative for MSMEs?

Strategies that CXOs need to be effective leaders in 2023

Technology is a tool, not the backbone of the businesses we invest in,” Anirudh A Damani, Director, Artha India Ventures

India – today ranks 14th in export and 8th in import chemicals globally – is expected to see its chemicals industry reach $304 billion by 2024. Employment generator for millions, the chemicals industry is largely dominated by unorganized players. Shree Pushkar Chemicals & Fertilisers Ltd (SPCFL), a leading manufacturer in the specialty chemical segment, has recently launched its new range of dyes for the textile industry in Bangladesh, under the brand name of Dyecol. Going forward, the company plans to focus on huge capacity expansion and look for new markets for dyes and dye intermediates.

In a conversation with SME Futures, SPCFL chairman and managing director Punit Makharia talks about the state of chemical industry in India, how the US-China trade war is opening up opportunities for companies in India, and more.

What is the current scenario of the chemical industry in India?

The industry, which was barely trying to stay competitive, received a lifetime elixir not only to survive but also to thrive with better prospects. Currently, analyzing the Chinese situation, after-effects over the past 4 years, and the state of Indian chemical industry, we believe that the Indian chemicals industry is at “India Chemicals 2.0.”

This phenomenon can be acknowledged as the understanding of the Indian industry on the opportunities created due to Chinese issues and is well positioned to tap these opportunities through multiple levers such as foreign customers’ confidence, growth in domestic consumption, better pricing and margins, thereof, increased capacities, compliance with environmental regulations among others. We, thus, believe that the Indian chemicals industry is at the next phase of growth, which shall continue over the next decade.

The next decade for Indian chemical industry growth is also echoed by the Indian government through initiatives such as ‘Make in India’ and larger focus on developing and promoting Petroleum,

Chemicals, Petrochemicals and Investment Regions (PCPIRs). This confidence can be ushered by bold projections stating that the Indian chemicals market valued at ~US$ 163 billion in FY18 (with specialty chemicals share at ~US$ 32 billion) to almost double at US$ 304 billion by FY25.

How the trade war between China and the US is faring for the Indian market? What are the opportunities?

The chemical industry is shifting from China to India, basically in terms of the environment. All the chemicals that are produced…the basic problem with these kinds of products is the heavy discharge of the effluents – organic as well as inorganic waste. To handle these kinds of waste is an extremely difficult task. Manufacturing dyes and dye intermediates is not very technical, but the issue is more about handling the waste during the production. The waste is generated in large quantities.

At present, India and China are the major suppliers of chemicals; but if you see during 1970 to 1980s, the production was mostly done in countries like Switzerland, Germany, and other European countries. The focus of the industry has shifted from these countries to China as well as India due to the impact on environment. We can witness that China also is slowly and steadily making an exit, mainly on account of unregulated heavy discharge; and other companies in China are facing issues to systematically treat the waste, thereby facing frequent shutdowns and large capital outlays. In the past few years, China has become strict in their environment laws. In coming times, India would be the major supplier of dyestuff to the world. Indian manufacturers are more compliant as far as environment issues are concerned.

The dye and dye intermediates industry largely caters to the textile industry and is concentrated in China, India and other smaller Asian Countries. China has had a dominant position in production and consumption of dyes globally. However, China’s dominance is steadily shrinking. China’s share in the global colorant industry was once about one-third of the total supply but has gradually declined over the years. The key reasons are that the Chinese government’s efforts to tackle pollution and stringent norms against errant polluting industries. The enforcement of stringent government norms to curb environmental pollution by chemical companies resulted in the periodical shutting down of large capacities within the dyestuff/dye intermediates industry. Recently, the Chinese government has extended the fight against pollution to mining and metals industry such as aluminum as well – reiterating its focus on curbing pollution.

India still has a low level of chemical consumption per capita. What’s your opinion?

Traditionally, the European Union and United States were key chemical hubs globally. Together they contributed to nearly 40 per cent of global chemical sales till 2006. However, the Great Recession of 2008 changed everything. Developing countries started faring better than the relatively mature economies of the West. Over the last decade, the core of the chemical industry has shifted from the West to Asia, with India being the key benefactor after China’s change in environmental policies on the companies. Manufacturers in the Asian region enjoy low labour costs, relatively relaxed environmental norms, and government subsidies.

Growth of chemicals industry is dependent upon growth in major end-user industries such as construction, textiles, automobiles and consumer durables. Domestic chemicals industry, estimated at ₹6.3-6.8 lakh crore in fiscal 2019, clocked 7-8 per cent CAGR during FY2014-FY2019.

How the government’s demonetization, GST and Make in India initiatives have impacted the chemical sector?

These reforms and other initiatives have supported a dramatic, even historic, rise in India’s ranking on the World Bank’s Ease of Doing Business (EoDB) Index — a jump of 30 places into the top 100 countries. In fact, India is the first large country ever to record such an increase in ratings over a single year.

However, the chemical industry is highly fragmented and unorganized with intense rivalry among competitors. Due to the 100 per cent FDI allowed in the sector, domestic players can face stiff competition from foreign multinationals that can exert strong price pressures on local markets. Huge capital requirements, patent protection, R&D costs and personnel requirements present other challenges. But for every challenge, there is an equal if not greater opportunity. The fact remains that the centre of gravity for the global chemical industry is moving to the East, and Indian chemical companies are well-positioned to take advantage of this transition.

One of the major challenges is the lack of feedstock. How is industry is dealing with the issue; and what is the solution to this?

In today’s rapid business scenario, a company’s lack of agility will significantly affect their ability to be competitive. The chemical industry, being highly volatile, requires the players in this sector to evolve and adapt themselves to the changing market conditions constantly and less dependability on other players. To help them achieve this, chemical manufacturers must have a reliable IT infrastructure and ERP system that can analyze operational data, support critical business functions, and ensure improved organizational transparency. With the rising competition on one side and mounting challenges on the other, the only option left with the chemical manufacturers to survive in the market is to covert these challenges into opportunities.

We are a zero-waste chemical company with a unique business model that is completely forward and backward integrated. With innovation at its core, the company prides itself of being inventive in delivering high-quality products. Our company has multiple plants that produce a wide range of products including dye intermediaries, dyestuff, acids complex, fertilizers and cattle feed. We are catering to the leading textile and apparel companies including some MNCs in the business. We have a unique positioning is the effluent management plant (ETP) that the company has developed which acts as a major driver in manufacturing of these products. The company can monetize the effluents by using the waste of a process/product as a raw material to manufacture other sets of value-added products. As a part of forward integration, we have forayed into dyestuff with an aim to be an integrated one-stop textile chemical solution provider and added a new plant in 2016. To strengthen the portfolio further, the company is also foraying into specialty textile chemicals manufacturing.

Lately, there has been more focus on sustainable manufacturing. How it is impacting the overall chemical sector’s growth?

Chemical industry is also offering new products according to the changing requirements of the market. The industry has developed microbial de-colorization and degradation procedures for textiles and begun exploring biodiversity for natural dyes and developing eco-friendly methodology for synthetic dyes. Public sector refiner Hindustan Petroleum Corporation Ltd (HPCL) has intended to launch green lubricants developed from renewable feedstock. DuPont, as part of its R&D strategy, has set up a knowledge centre in India focusing on areas like green technologies for refinery processes. Tata Chemicals has established an innovation centre to focus on green technologies in emerging areas such as nano-technology, fermentation and biofuels.