Home/ News/ India is a bright spot in the global economic arena: WEF

India is a bright spot in the global economic arena: WEF 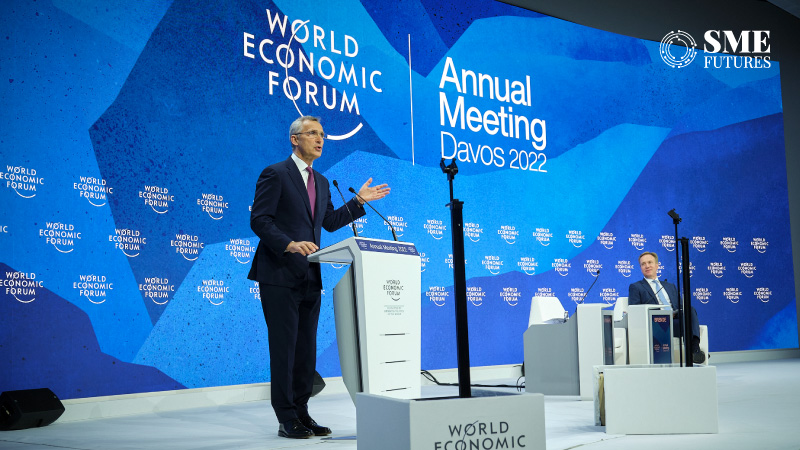 The World Economic Forum’s Annual Meeting took place during May 22-26 at Davos, Switzerland. The WEF meeting was attended by about 3,000 participants from across the world including 109 from India. In an interview on the sidelines of WEF, Borge Brende, President of the World Economic Forum (WEF) described India as one of the main drivers of the global economy amid post-Covid-19 disruptions, further aggravated by the Ukraine War.

He described India as a “bright spot” in the global economic arena as India is poised to achieve a higher growth rate in FY 2022-23 than the global average.

India is set to grow by 7-8 per cent this year, as compared to an estimated 3 per cent growth rate for the global economy as a whole. According to the WEF President, the faith of the global leaders remains intact in the long-term prospects of the Indian economy notwithstanding temporary disruptions due to moderation of demand and disruptions in supply chains in the global market.

He added, “For India, I am a little more optimistic and very bullish — both in the long term and medium-term despite the short term challenges faced by India and other countries.”

While appreciating India, the WEF President stated that India has unique skills and very young population that works in its favour. He also emphasized that now India also needs to build further skills and has to start competing more with the US and China on emerging technologies like artificial intelligence, data and on digital currency.

India today is a fascinating global investment destination due to its sustained commitment to economic reforms and improvement in the ease of doing business. Foreign Direct Investment (FDI) inflows to India have shown a continuous increase from $45.15 billion in 2014-15 to $81.97 billion in 2020-21.

This is the result of investor-friendly policies of the government of India which allows 100 per cent FDI under the automatic route. The government has also undertaken a number of reforms across various sectors in last one year including insurance, defence, petroleum and natural gas, and telecom, etc.

Although India would not be totally decoupled from the adverse effects of the Ukraine War on the global supply chains, its fundamentals are strong and resilient. In its latest forecast, the United Nations Conference on Trade and Development (UNCTAD) slashed India’s growth forecast for 2022 to 4.6 per cent from an earlier estimate of 6.7 per cent.

However, India still remains much above than projected global average growth at 2.6 per cent reduced by UNCTAD from its earlier forecast of 3.6 per cent. India would still remain a bright spot while big economies like Russia and Western Europe and Central, South and South-East Asia could confront significant economic slowdowns.

The developing countries according to UNCTAD may face rising commodity and energy prices and even disruptions in supply chains, reflexes from trade sanctions, food inflation, tightening policies and financial stability. But it is the resilience and policy responses that would make a difference to India.

India’s resilience lies in its reliance on a combination of both domestic-demand-led growth on one hand and its increasing integration with the global economy and thrust on export-led growth strategy on the other.

Indian Finance Minister, Nirmala Sitharaman, while speaking at a Development Committee Plenary of the World Bank in Washington DC stated (April 22) that “India’s economic growth at 8.9 per cent in FY 2022 and IMF forecast of 8.2 per cent growth for FY 2023 is robust and highest among all large economies and reflects the country’s resilience and strong recovery post the Covid-19 pandemic.”

The Asian Development Bank in its latest forecast was also upbeat about the Indian economy. It estimated that India would grow 7.5 per cent in FY 2022 and 8 per cent in FY 2023 supported by increased public investment in infrastructure and pick up in private investment and appreciated India’s handling of the Covid-19 pandemic and successful vaccination drive.

It underscored that “Government of India’s policy to improve logistics infrastructure, incentives to facilitate industrial production and measures to improve farmers’ income will support the country’s accelerated recovery.”

Earlier, the Government of India’s Economic Survey had asserted that “the Indian economy is well placed to face the challenges of FY 2023 particularly due to strong foreign exchange reserves (about $630 billion), robust growth in government revenue collection through Goods and Service Tax and supply-side reforms such as factor market and process reforms as well as focus on provision of social infrastructure and production linked incentives.

There is a point in being upbeat about India’s economy. Deloitte in one of its research paper noted that India, along with other emerging economies, was reeling under the external shocks, however, it maintained that “India’s underlying economic fundamentals are strong and despite the short-term turbulence, the impact on the long term outlook will be marginal”.

It highlighted that the results of “growth-enhancing policies and schemes (such as production linked incentives and government’s push towards self-reliance) and increased infrastructure spending will start kicking in from 2023, leading to a stronger multiplier effect on jobs and income, higher productivity, and more efficiency — all leading to accelerated economic growth.

It further concluded that various government incentives such as lower taxes and rising service exports on the back of stronger digitization and technology transformation drive across the world would aid in growth. It also assessed that several spill-over effects of geopolitical conflict may enhance India’s status as a “preferred alternate investment destination”.