This Gurugram based start-up claims to have created the world’s first on-demand, doorstep to doorstep, fast electric vehicle charging service in order to make charging-as-a-service a model that the rest of the world can emulate. 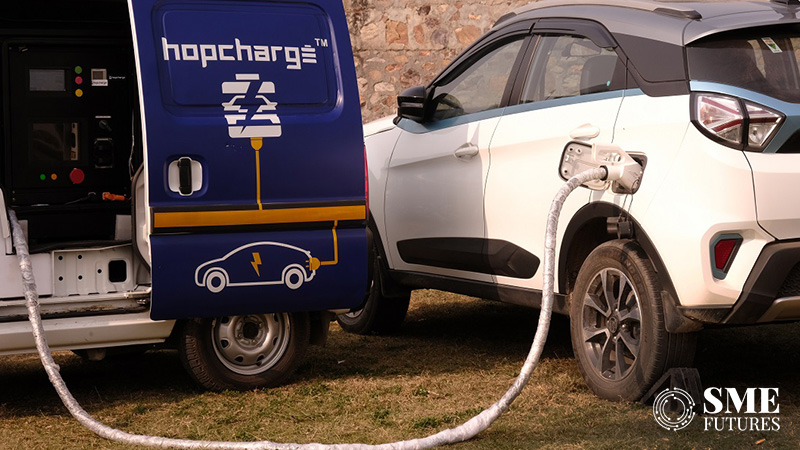 For a few years now, India has seen a series of advancements in the electric vehicle (EV) arena. With the Government of India pushing EV adoption through various schemes and policies that provide incentives and subsidies to both manufacturers and consumers, India’s EV industry is moving in the right direction.

Considering this as a challenge, a Gurugram based start-up - Hopcharge has come up with an on-demand, doorstep to doorstep, fast electric vehicle charging service. Founded in 2019 by Arjun Singh and Saurabh Rohilla, this one-of-a-kind start-up provides mobile, doorstep charging services in the Delhi-NCR areas of Noida and Gurugram.

Hopcharge: a child of adversity

In a one-on-one discussion, we asked Arjun Singh, Co-founder and CEO at Hopcharge about the idea behind this one-of-a-kind start-up. Giving away the reasons, he says that it was the vacuum in this sector that gave them the idea to work around this challenge. The current scenario and the inadequacies in the availability of the EV charging infrastructure in India were the driving factors behind the creation of Hopcharge.

“There are only around 1800 EV charging facilities available,” Singh tells us.

He says that the EV stations in the country are the biggest challenge for the industry to grow. “It doesn’t only include a lack of charging stations but also the lack of proper charging set ups in the homes of the EV owners. That’s one of the reasons for people opting out of using electric vehicles,” Singh elaborates.

According to him, the business model that they have developed has enormous potential. He believes that a conservative estimate of its market potential in India alone is approximately 19 billion US dollars. “This estimate is only for the 4W EV market for personal and commercial use and does not include charging for buses and trucks. Hopcharge is designed for a global audience,” he says.

Get EV chargers at your doorstep

Now just like your groceries, you can order EV charging at your doorstep. You just need to subscribe to their services, Singh says.

“The Hopcharge subscription service provides the user with a hassle-free charging experience which removes the dependency on fixed charging stations along with the high-cost setup of a fast-charging station at home,” he explains.

Hopcharge claims that the user only needs to shell out an amount that is as low as Rs 3.5 per km.

It is a proprietary technology developed by the start-up, which acts as a plug-and-play fast charging network. “The hardware (mobile, modular, and plug & play) is developed from scratch for this specific purpose and complemented by a user mobile app (iOS and android) and supported by a technology-enabled backend energy management system to execute the end-to-end process,” says Singh.

This on-demand, doorstep service results in a lower cost of ownership as the user only needs to shell out around Rs 3.5 per kilometre, he adds.

“Hopcharge has a proprietary energy pod that has a lithium ion-based energy storage coupled with a rapid charger, which can charge EVs at the same speed as a public fast charger,” says Singh.

Currently, the Hopcharge team consists of 30 members from the e-mobility, auto and energy backgrounds. But just like any other start-up, there were some initial challenges that the company had to face.

While building the company was easy, Singh shares that his initial challenge was to build an infrastructure for EV charging in a way that it would be easily accessible to its users.

“Through Hopcharge, we wanted to promote the adoption of EV vehicles in India by providing EV car owners with a suitable way to charge their vehicles. What has helped us through the process is the fact that the early response from the EV owners has been overwhelming and more and more people are requesting us to expand and provide our services in their respective cities,” he says.

Hence to build this ecosystem, the start-up is first testing its model in different cities. “Hopcharge has decided to work on a 12-month forward plan to deploy Hopcharge pilots in 3 cities in India. i.e. (Delhi NCR – Delhi, Gurugram, Noida), Bengaluru, and Mumbai,” Singh informs us.

As of now, the company is successfully running their services in Delhi-NCR with their subscription plan –HopchargeX. As per the company information, they have completed over 255 charging sessions.

Future plans and the roadmap ahead

Hopcharge began in Gurugram and has since expanded to Delhi, Noida, Mumbai, and Bengaluru. Initially bootstrapped, the start-up has now attracted the attention of investors as well, owing to its unique business model. “We were initially supported by Dr Tsuboi, President of EVQ Japan and a mentor at Multi Suzuki e-mobility,” Singh tells us.

The start-up is ensuring that it has enough competitive advantages in order to aggressively capture a significant portion of this market. To do so, one of its strategies is to gain support from the mobility giants—for instance, Hopcharge has officially collaborated with Tata Motors and is selling their subscriptions at the dealership level.

Singh further elaborates on his game plan, which includes working on three areas to gain a competitive advantage and mining the potential to create barriers to entry for any future competition.

“These areas are—Intellectual property around the core business model; ensure that the product innovation is organic to the extent that it suits this unique solution. The hardware is built around some core philosophies – faster turnaround, plug-play, universalisation, pro-energy decentralisation and distribution, etc. Thirdly, a high LTV (approx. 3,500-6,500 USD/EV user) pro subscription model uniquely modelled around knowing your customers’ charging patterns,” he says.

Going forward, their ultimate goal is to broaden their footprint.

“We are planning to expand our reach deeper into Delhi – NCR, followed by the other major cities of India,” says Singh. “Furthermore, we have seen many countries face similar bottlenecks, and we want to work with them to build solutions for the world,” he adds. Singh says that Hopcharge aims to become a truly global solution for EV charging, claiming that their proprietary solution can potentially accelerate EV adoption by 10 to 20 per cent.