Bengaluru based CarterX, a one-of-a-kind airport luggage transferring startup is trying to resolve luggage problem while travel, at the same time bringing in new business model in the travel segment. 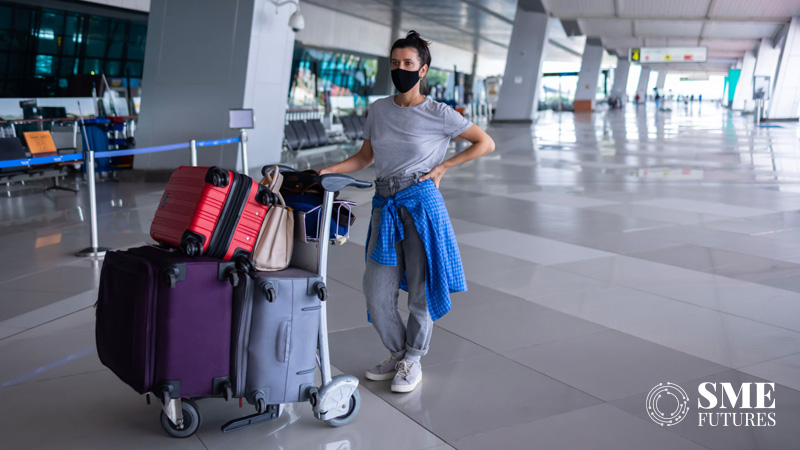 In this digital era, airport ticketing is automated. There are enough automated cab platforms that makes your travel seamless. However, there are still some many more anxieties that await a traveller. Visualise airline passengers travelling with big luggage bags meet with chaos, struggling at the airport. Unless someone need a wheelchair or pay highly for assistance, they won’t get solace.

You get the gist! It’s the luggage problem. It’s one of the issues of air travellers often witness. Start from travelling from homes to long check-in lines, the baggage may hinder all the fun, says, Harsha Vardhan, a Bengaluru based entrepreneur.

Vardhan who has extensive corporate experience of two decades felt there is vacuum in the space. “Airport passenger market for luggage is still untapped in India,” he says, as he tells us what made him to found CarterX, one-of-a-kind airport luggage transferring startup.

Launched in 2017, CarterX is a single-stop solution that brings the airport to the potential 300 million passengers’ fingertips in India. This startup offers value-added services like home pickup of baggage before travel, last mile dropping of baggage, slashing time spent on long queues at the airport and ensuring a smooth transition in the process.

“My previous stint for over 5 years gave me a valuable insight into logistics, the flow is differential for each entity and segment. I found the space extremely challenging and, at the same time exciting. A lot can happen during the journey of a product from the point of source to where it has to be delivered. This motivated my team and me to dig deeper into the market,” Vardhan tells us.

While doing the ground research, Vardhan and his co-founder Ramya Reddy discovered that the airline or airport passenger market for luggage in India is still untapped. “There are similar services available globally that make air travel hassle-free but not in our country,” elaborates Vardhan. “And that’s how we became confident, which encouraged us to come up with a company that makes travel stress and hassle-free,” he says.

Idea came out of a bicycle-tour

In our country, we mostly carry our own luggage, except when we enter hotels and leave the luggage to be assisted by the concierge.

But, other regions’ travel markets are more developed than ours in India. Vardhan, on the other hand, had a lightbulb moment after hearing about his co-founder Ramya Reddy’s bicycle tour experience. “The concept came into my mind after my co-founder took a bicycle tour and had her luggage seamlessly delivered from one location to another,” Vardhan tells us.

“The travel market is changing, and travellers want convenience, whether it’s skipping lines or getting assistance with their luggage,” he adds. That is how both of them decided to enter the market.

The need was there to create a platform that allows the airport and airlines to interact with the passenger, says Vardhan. “That’s exactly what CarterX does bring service assistance at the airport with alliances from airlines. Our airport service assistance is available until the check-in counters for passengers at departures and from the baggage belts for arriving passengers,”

CarterX provides a slot-based pickup and delivery service. It enables customers to easily select the time and location of their baggage transfer to and from the airport. Customers do not need to look for trolleys or drag their bags out of their cars, and they can get help at the counter through airline synergy services like 6Ebagport, GateToGate, Flyporter, and LuggageAssist.

“We have served people from all walks of life, including business travellers, families, and others. We built the platform to bring this to life after a deeper understanding and research. When we arrived at Bangalore airport, they were enthusiastic about taking us in and providing us with space,” That’s how CarterX was born in 2017.

According to founders, freedom from luggage gives freedom of movement to passengers and that’s been their concentration from the onset of the company.

Vardhan shares, they tested the product for the whole of 2017 and improved the security protocols using the great assistance from the airport for the product. “In 2018, we expanded to Hyderabad airport. In 2019, we got an opportunity to expand into Mumbai airport. And by 2019, we signed for the Delhi airport. During this journey, we captured four significant cities in India,”

Also Read: Aircraft leasing in India to give ‘raftar’ to the Indian aviation industry

Currently the team consists of 34 people, who supervise operations at four airports as a 24/7 service. Vardhan says, it’s a lean team of well-trained ground force, but their numbers are bound to increase with expansion plans.

The startup main target audience is international travellers. While families who are travelling across and senior travellers are the other set of target audience. “It is categorised this way because the percentage of elderly travellers’ is lesser. On our platform, many of the bookings are from younger audiences who book this service for their convenience or for their loved ones. Business Travelers’ use our arrival service mostly since they don’t want to lug their luggage to their meetings,” Vardhan says.

Since new normal, the startup is gaining traction, as SOPs for travelling has changed. Cities like Delhi have CNG units in their cabs, which significantly reduces luggage space. Now cabs allows a two-bag limit, forcing a family of four or six to split up for the sake of their luggages. Since, CarterX lives on such audience, they provide airport baggage assistance to all audiences. “There is no select group of customers who use CarterX services to make their travel more convenient, convenient, and comfortable,” says Vardhan.

Vardhan claims CarterX doesn’t have any competitors in India. But they collaborate with similar companies in this space in other regions. “Globally, a few companies provide services like us, but we have the most extensive portfolio. For example, in UK, Airportr operates; then there is DUBZ based out of Dubai. We see collaborations to expand faster internationally, they open the gateway to Indian passengers in their country while we do the same for the passenger entering and exiting our country. We are in talks to commence our 1st international alliance and will roll the same shortly,”

Bringing in a change

We Indians take our belongings’ security very seriously while travelling, and we don’t trust anyone else with them. In fact, here placards give shoutouts to people, ‘Apne saaman ki suraksha swayam karein’. In this scenario, concept like CarterX is fairly new to Indians.

In Vardhan’s own words, it was challenging for them to be understood. “When you trying to introduce something new, that changes the way you have been doing things, its challenging. But I am happy to say that passengers are engaging with the platform. As we are gaining traction at the current locations, we would look at expanding to more cities,”

To pass hurdles, they took support from Bangalore and Delhi airports, and seek advice on every challenges that came their way. “It’s exciting to be paving a new service of airport transfer to 1st and last mile logistics and the challenges are worth the pain when the service is of use and convenience to the end passenger,” he says.

At the same time, security aspects is other major priority for them. To maintain high security measures, the company follows security protocols designed, and assigned by airport authorities. Besides that, the passenger needs to meet CarterX personnel before entering the airport terminal on departure and on arrival before exiting the airport, informs Vardhan.

“There is also a call centre service from 9am – 9pm to track the luggage and seek assistance on order making or order process or delivery,” he adds.

To enhance every aspect of their product portfolio, the company leverages layers of newer tech and blockchain to automate certain aspects of the service. While, analytics helps to sort slot services to add or move the time slots as per the volumes. They also help in route optimisation and resource allocation.

On the investment front, the brand is currently backed by Venture Catalysts, an incubator for startups and Mumbai Angels on multiple rounds. Several other individual investors, including Nikhil Vora and Swati Mehra of Sixth Sense Ventures LLP have also invested under individual capacity. Vardhan tells us, with all the support they are getting, the company is looking for expanding operations to more cities.

“We are gaining traction at the current locations. We are working on expanding to more cities and eventually want to be the only platform aggregating more airport services that can bring the wholesome airport experience to the doorstep of the traveller,” Vardhan tells us.

Indian air travel market is poised to be the third-largest civil aviation market by 2024, as per the DGCA, Data in hand and other sources. The industry is expected to grow at about 8 to 10 per cent yoy with more airports coming. “At this growth speed, and travel restrictions and international skies opened, CarterX expects spectacular growth in terms of the number of users and traction. We have just scratched the surface. But we look at capturing about 33 per cent market share in the passenger baggage segment over the next five years,” enthuses Vardhan.