ANSCER Robotics, a Bengaluru-based start-up aims to democratise robotics with their AMR robots and their Robots as a service (RAAS) option, through which they will rent out their robots, a move that will definitely disrupt this space. 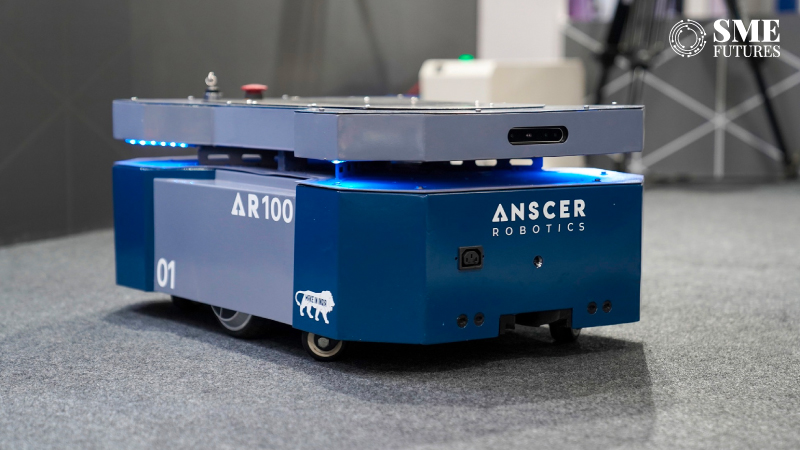 Somewhere in peninsular India, the workers on a bike manufacturing assembly line sighed with relief, as they saw robots doing all the heavy lifting.

Now, there are less ergonomic risks, and the robots handle the physically stressful manual work all day. The result is the improved efficiency of manufacturing capability, enabling the employees to turn their attention to more meaningful work. The owner of the business gives us this information but prefers to remain anonymous.

This scenario may be something new for the manufacturing workers, but it’s not going to be the only one. Thanks to Autonomous Mobile Robots [AMRs], the manufacturing scene is changing gradually in India. These robots can be used by manufacturers across industries, including but not limited to the automotive, electronics, FMCG, healthcare, hospitality, pharmaceuticals, and warehousing industries.

However, these robots are yet to penetrate deep into the system, says Ribin Mathew, CEO and Co-founder, ANSCER Robotics. “The Indian manufacturing environment is a different ballgame altogether,” he states.

“Most of the time, it’s rough, rugged factory floors in most Indian factories and few employee-centric solutions that keep safety and ergonomics in mind. The AMRs or any automotive technology needs to be created keeping in mind this chaotic Indian manufacturing infrastructure, which the Indian AMR companies are aware of,”

Ribin Mathew along with three others- Ebin Sunny, Raghu Venkatesh and Raj Mohan have founded ANSCER Robotics. Launched in July 2020, it is a homegrown company that develops efficient, flexible, user-friendly, and safe robotic solutions to help companies to skyrocket the efficiency of their operations.

Love for robotics and entrepreneurship

“Our platform is completely modular and can be easily customised for use in a wide range of industries that require material transportation.” The start-up has created a series of AMRs – the AR250, the AR650, and the AR1250 – each named after the payload it can carry and powered by their proprietary ANSCER Engine to demonstrate this adaptability (AE).

“They (AMRs) have transformed internal mobility by handling specialised processes such as transporting inventory and products throughout an environment, lifting pallets and shelves, tugging trolleys, doing conveyor integration, and even working with collaborative robot arm fixtures,” Mathew explains.

Since their inception, the team has been receiving a positive response. Mathew says that they are prioritising product development. Over the past few months, the company has raised additional funds and has been able to generate revenue that meets their initial goals.

“We’re elated to say that in a short time span, from July 2020 to now, we’ve grown from a team of 4 to a team of 35 who are now contributing to ANSCER’s growth and success. With the positive responses that we’ve been receiving and the support that we have found, we’re pretty confident that we can hit our upcoming targets as well,” he enthuses.

So how did you all meet, we ask, as all four founders share a love for robotics.

“We’ve known each other pretty much since our young days,” Mathew tells us. “Some of us have known each other since we were kids in Kerala, so for over a decade. Some I’ve studied with or met through work, so yes, we’ve been in the same network for many years now,” he further elaborates.

Most of them were already in the field of robotics and automation in other companies and had even founded other ventures and lived abroad. “We’ve all loved robotics from a pretty young age and have also had a passion for entrepreneurship,” says Mathew.

While Mathew serves as CEO, Ebin Sunny, the COO, was Mathew’s classmate from Kerala’s first batch of robotics engineers in 2017. Raghu Venkatesh, the Head of Business, is an innovator, and Raj Mohan, the CTO, is a university topper and gold medallist in his Robotics and Automation Engineering Master’s programme.

“With strong entrepreneurial dreams, we’ve always wanted to create our own venture and have a strong hand in shaping the robotics industry in India,” he adds.

The vacuum in the robotics sector in India

According to Mathew, it was the pandemic that made him realise that automation is imperative in these uncertain times, and he and his team believe that robots can mitigate many manufacturing challenges.

However, there is a vacuum in the robotics sector, he points out.

Prior to the pandemic, conventional forms of automation, such as conveyors or forklifts, were popular. Most of the time, labourers were assigned to do the dull and dangerous tasks. However, the pandemic has changed the way that assembly lines operate, making Indian manufacturers, big or small, realise the urgent need to move forward and adopt next-gen technology to automate their factories and warehouses.

“They are now questioning the effectiveness of the traditional systems. The industry is gradually but steadily adopting the more efficient industrial technologies, such as the AGVs and the AMRs. I believe that this sector has huge potential. As a company, we genuinely want our country to become #1 in this domain by conquering all the challenges posed by this industry,” says Mathew.

That’s how they started working on their first invention. During COVID, they launched a UV Disinfectant Robot that won national and international awards. “We powered it with our own ANSCER Engine, which is our proprietary property. We also recently launched our own line of AMRs to help solve the challenges of internal logistics and mobility,” he tells us.

Mathew informs us that according to ANSCER’s analytics, if the sales figures of their AMRs for the last 4 years are taken into consideration, the year 2022-2023 is projected to be their largest sales wise, due to the evolving mindset of the Indian manufacturers and the many upcoming Indian businesses, as well as due to initiatives like the Make in India initiative.

AMRs are collaborative robots, designed to work alongside humans, enabling man and machine to work safely together in the same environment. By implementing robotics solutions in manufacturing, India can truly advance and strengthen its position as a leading global manufacturer that is employee friendly and believes in creating high-quality products using advanced technology.

However, there are obstacles.

To begin with, the manufacturing community possesses little to no awareness about AMRs, so it will be a stretch to expect them to use them. Discussing this, Mathew says that businesses in the tier 2 and 3 markets lack proper knowledge about automation.

“AMR awareness is still at a very nascent stage in India, at about a 5-10 per cent capacity. Be it manufacturers or warehouse owners or workers, their knowledge of deploying and working alongside automated solutions is limited and hence they still employ the traditional methods in their operations. Overcoming this challenge can take many years, but once it’s achieved, it’s going to only add more value to the whole ecosystem,” he adds.

The market is unaware of the fact that there are good Indian companies, manufacturing and distributing AMRs throughout the country, so they associate the technology with heavy investments and no local expertise for their deployment or service, he elaborates.

Not just this, there’s a dearth of blue-collar workers on the assembly lines. And AMRs can tackle this issue. “If there are government led initiatives to educate and support companies that are trying to deploy robotics or advanced solutions, that would make the whole deploy-automated-solutions initiative more credible and people might start acting upon it as well,” says Mathew.

On the other hand, affordability is also a factor that can impact the adoption of AMRs. “Probably the biggest barrier to implementing automation is its cost,” Mathew adds.

“But AMRs allow for partial automation and are easy to deploy without having to make huge changes in the existing setup, so they’re inexpensive to deploy as well,” he continues.

Speaking about the trends, Mathew feels that RAAS—Robots as a service is a new trend which can also resolve the affordability problem. “Robots as a service (RAAS), where businesses can “rent” robots for periods of time is a trend that can disrupt this space a great deal. This enables small businesses to understand the technology and its benefits for a shorter period of time, giving them the chance to truly explore robots before making a permanent investment. ANSCER Robotics provides RAAS options so businesses don’t have to make long-term commitments and can experience and avail themselves of the benefits of robotics technology without needing to make a permanent investment,” says Mathew.

Future of AMRs and ANSCER Robotics

There are some interesting customer stories that give us a glimpse of the future of robotics in India.

Mathew says that the future of AMRs is bright. “The most common response we get from our customers is that they cannot believe that our AMRs are made in India. They automatically assume that ANSCER’s AMRs are imported from the USA, Germany or Europe. That’s very flattering for us and it just inspires us to show our customers in the country and outside, that India is capable of creating such technology,” he enthuses.

The first wave of robotics was about automating large-scale manufacturing, where the machinery was large, complex, and expensive. However, it still had some unique selling points to meet the needs of the industry, he says.

But those catered to only a handful of companies, which had the operational scale and capital to be able to deploy them. But the mobile robotics market has the potential to really boost this sector.

“It focuses on the internal logistics segment with small modular units with the aim to make industrial robots more accessible. Our AMRs are more affordable and versatile than most other players in the market, with state-of-the-art algorithms developed in-house. Also, our ANSCER Engine goes one step further and enables people to easily develop tailor-made mobile robot solutions that can be used in any application, irrespective of the size of their operation, making it suitable for virtually any indoor environment, whether it is a warehouse, factory, or even hospitals, hotels, and restaurants, for various material movements,” elaborates Mathew.

However, there’s still so much to do, Mathew tells us while talking about the roadmap for his company.

His start-up is focused on perfecting its product range and is investing most of its time and effort on product development and on spreading awareness about AMRs. “We recently launched our range of AMRs. In terms of marketing, we’ve realised that the Indian market is seriously lacking knowledge about the technology and its benefits. So, we want to focus on educating the market and spreading awareness about the availability of this great technology, about how it can be a boon to the manufacturing world, by using a combination of online and offline channels,” he avers.

The start-up is also focusing on their rental services to gain the trust of the small businesses. In the long run, the company wishes to expand and be deployed by the manufacturing and service industries, allowing them to reap the benefits of this revolutionary technology.