For the Indian economy, 2022 has been a year of recovery, stability, hiring and expansion on one hand, and challenges, cold funding, inflation, recession, layoffs and salary cuts on the other. 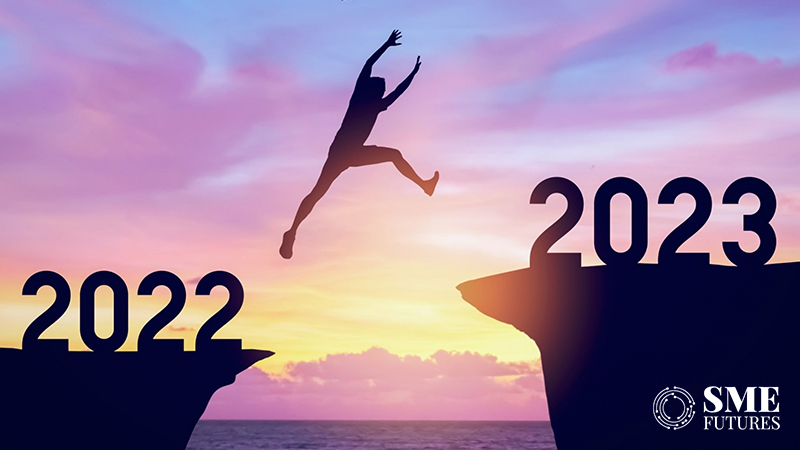 2022 is about to end, and it has been a roller coaster ride for India Inc. When industries and small businesses started to recover from the pandemic’s losses, the inflation and repo rate hikes throughout the year challenged them to fight for their survival yet again.

When we look back at the state of Indian MSMEs and start-ups through the window of 2022, it shows a series of events…. let’s take a look at them.

In the Union Budget of 2022-23, the MSME sector was allocated an Emergency Credit Line Guarantee Scheme (ECLGS) of Rs. 50,000 crores. Additionally, on March 30, 2022, the government allocated Rs. 6,062.45 crores for the Raising and Accelerating MSME Performance (RAMP) scheme.

As per data from the Ministry of MSMEs, as of November 25, 2022, the Udyam Registration portal registered 12,201,448 MSMEs, replacing the former process of filing for a Udyog Aadhaar Memorandum (UAM).

MSMEs are being encouraged to market their products on the e-commerce site, especially through the Government e-Marketplace (GeM). As of November 2022, the GeM portal has served 12.28 million orders worth Rs. 334,933 crores from 5.44 million registered sellers and service providers for 62,247 buyer organisations.

By December 2022, the number of loans sanctioned under the Pradhan Mantri MUDRA Yojana (PMMY) scheme reached 37.76 crores, which has already disbursed Rs. 20.43 lakh crore since its inception in 2015.

Also Read: How was 2022 for the key sectors and way ahead

2022 has been sweet and sour for MSMEs according to Business Coach & Executive Coach at Ethique Advisory, Ratish Pandey, who says, “Initially, in the year, MSMEs were challenged by inflationary pressures on their products, but that settled down as the European & US economies slowed down. All in all, in my experience, MSMEs in India have had a great run once the markets opened up post-COVID.”

“The most significant challenge faced by the MSME industry has been inflationary pressure on essential products, resulting in bottom-line challenges for them. The strengthening of the dollar also impacted the MSMEs’ bottom lines, especially of those which are dependent on imports,” he further adds.

Along with that, the Indian economy this year has seen a significant rise in the number of start-ups, taking the Indian start-up ecosystem to new heights.

Rise of start-ups and unicorns

The year 2022 has been the year of start-ups and unicorns, as India saw a big surge in the number of start-ups. According to the data provided by the government, the number of recognised start-ups in the country has increased from 471 in 2016 to 84,012 in 2022. Out of these, around 58 per cent are confined to only five states of the country, with Maharashtra at the top with 15,571.

Start-ups continue to bring innovation and disruption in multiple industries, including space tech, edtech, agritech, health tech and fintech, ushering in tremendous opportunities for investors. With decisive leadership in place, the stage is set for the country to realise its vision of becoming a US$ 5 trillion economy and a global powerhouse by 2024-25.

However, in contrast to the rise in their number during the first half of the year, the start-up’s funding hit a two-year low to $2.7 billion in the third quarter of 2022, as per a PwC India report. Amid the global recession, only two start-ups in India attained unicorn status in the July-September period of 2022.

“For the start-ups, the winters came in early. The equity funding dried up, forcing start-ups to look at cutting costs/employee costs to extend their runway. The investors did not totally disappear; they just altered their approach to offering venture debt. Despite that, start-ups are still battling with the “funding crunch”,” says Pandey.

With the rest of the world grappling with the aftermath of the pandemic, the recession, the energy crisis, the war and the supply chain breakdown, the Indian start-up industry has been taking giant strides in creating sustainable solutions across various sectors.

“One is hopeful that the government will continue the announced support packages for another year to keep the momentum going,” he avers.

The strong performance of past SME IPOs spurred investors’ interest, with 104 small and medium enterprises (SMEs) garnering Rs 1,800 crores through initial share sales in the first nine months of 2022. This was way higher than the Rs 783 crores that 56 companies had raised through IPOs in the entirety of 2021, the industry data shows.

According to Chittorgarh.com, India this year has witnessed almost 150 IPO launches, including mainboard and MSMEs. Adani Wilmar Limited, Venus Pipes & Tubes Limited and Sula Vineyards are some of the blockbuster IPOs of 2022.

While on one side there were quite a few IPO and start-up launches, big tech firms like Amazon, Microsoft, Zomato, Swiggy, BYJU’S, Unacademy, Vedantu, and many others laid off hundreds of their employees.

Since the second half of 2022, tech giants have been announcing large-scale layoffs, and it appears that things are only just beginning to get worse. After Elon Musk decided to eliminate nearly half of Twitter’s global workforce, Amazon and Meta followed suit by laying off thousands of workers just before the holiday breaks.

Amidst the global meltdown, 1,495 tech companies have sacked 246,267 employees since the onset of COVID-19. However, 2022 has been the worst year for the tech sector and early 2023 might be even grimmer, according to data from layoffs.fyi, a crowdsourced database of tech layoffs.

In India, nearly 16,000 employees have been asked to go by about 44 start-ups, led by edtech companies like BYJU’S, Unacademy and Vedantu, as VC funding dries up.

Other tech start-ups and unicorns that have laid off employees in India include Ola, Cars24, Meesho, LEAD, MPL, Innovaccer and Udaan. Moreover, 17,000 tech employees have been shown the door in India too.

According to a MarketWatch report, layoffs are part of a strategy by tech firms to maintain viability through 2023 and beyond.

As India reopened after the two year-long pandemic induced restrictions, a hiring spike was seen in the Indian workspace. According to a report, more than 54 per cent of employers have expressed their intent to hire in the April-June quarter – 4 per cent higher than the previous quarter.

The Indian job market picked up pace ahead of the festive season in 2022, as companies ramped up their operations to meet the growing demands. A 13 per cent year-on-year growth and a 10 per cent sequential growth in September 2022 were reported by a Naukri.com JobSpeak report. Also, eight million jobs were created across various sectors during the fiscal year 2022, says a report by Avsar.

Well, the hiring scenario got twisted by the end of the year as start-ups got short on funding and investments. Amid the changing patterns in the start-up ecosystem, the funding winter and fears of an upcoming recession, India saw a 6 per cent drop in hiring activity (year-on-year) in October 2022. Also, month-on-month job postings saw a 5 per cent decline in the country, says a report.

According to another annual insight report by RazorpayX Payroll, the hiring of chief experience officers (CXO) has decreased by a massive 1,300 per cent since October 2021.

Amidst all the ups and downs in the corporate and industrial sectors, the Government of India has launched various policies this year.

The RBI and the finance ministry say that these hikes were done to tackle the rising inflation due to various global factors like the Russia-Ukraine conflict, the rising fuel prices and the global recession.

India launched its first-ever e-rupee on December 1, 2022. RBI’s Central Bank Digital Currency (CBDC) is an electronic version of cash and will be primarily meant for retail transactions. The pilot was announced on October 31 for the wholesale segment.

After one month or so, it was introduced on a trial basis for retail transactions in the four cities of Mumbai, New Delhi, Bengaluru, and Bhubaneswar.

Let’s look back at the policies that the government launched for the betterment of the economy, especially of the MSME sector in 2022.

India declared that it would provide five lakh free e-tourist visas to launch inbound travel, and the country opened for international travel in a calibrated manner, according to a government release in January 2022.

In February ’22, the government proposed to create 22 Greenfield Expressways, 23 other significant infrastructure projects & other highway projects, and 35 Multi-Modal Logistics Parks (MMLPs) as part of the PM Gati Shakti National Master Plan (NMP), the Bharatmala Pariyojana and its various other schemes. It aims to break down departmental silos and encourage a more holistic and integrated approach towards the planning and execution of projects, which will lower logistics costs, resulting in massive economic gains for consumers, farmers, the youth and business owners.

Also Read: Demand for high-skill talent on contract grows by 105%

In June 2022, the central government announced a new initiative called “Promotion of MSMEs in Northeastern Region and Sikkim.” The main purpose of this project was to stimulate the MSMEs in the Northeast by establishing mini-technological centres, developing new and existing industrial estates and promoting tourism.

The National Logistics Policy 2022 will establish a single-window e-logistics market, while placing a lot of emphasis on developing skills, competitiveness and employment for MSMEs. It aims to lower the cost of logistics from its current 14 per cent of the GDP to less than 10 per cent. The policy aims to make Indian goods more competitive while also promoting economic growth and expanding job possibilities.

Speaking about the importance of the new logistics policy, Co-founder and CEO at Porter, Pranav Goel says, “The major benefit to organisations like ours will be from the Digital Integration System for logistics ecosystems. This will lead to a seamless and faster workflow, making logistics significantly efficient.”

“Additionally, the Sagarmala project will help in developing a low-cost multi-modal logistics segment in India. With digitization at the centre of innovation, the policy will expedite last-mile delivery, helping businesses save time and money,” he further points out.

On the whole, for the Indian economy, 2022 has been a year of recovery, stability, hiring and expansion on one hand, and challenges, cold funding, inflation, recession, layoffs and salary cuts, on the other. With high hopes for a better financial year in 2023, SME Futures wishes you a Happy New Year!!